Gormok the Impaler is the first boss of the Crusaders' Coliseum, released in in patch 3.2.

Typically, two tanks are used to deal with the Impale debuff. As soon as the first tank gets its third Impale, the second tank will taunt. Gormok impales the tank every 10 seconds, and the debuff lasts 30 seconds. Thus, the debuff on one tank will wear off just as the other tank is receiving its third impale. Each stack of the impale debuff does about 2k damage every 2 seconds. With three debuffs, that's roughly 6k damage every 2 seconds. Gormok's attacks hit hard (~15k every 2 seconds). Healers should be prepared for when the next tank taunts, so that they can immediately start healing.

Gormok hits hard, so there should be healers assigned to the tanks. Because of the constant damage to the off tank, Pallies work great: put Light's Beacon on one tank and heal the other tank. If one of the tank healers gets a Snobold, another healer needs to take over. Snobolds interrupt spell casting and stun their victims. Also, when healers run in range so melee can kill the Snobold, Gormok's stomp will also interrupt their casts.

Snobolds can be marked with raid icons (skull), as well as hunter marks.

Except when they have a Snobold on their back, casters should stay at least 15 yards away to prevent their spells from being interrupted by Staggering Stomp.

After Gormok dies, the Impale debuff can be removed from tanks through various means, such as Dwarf racial or a Pally bubble. The tank needs to quickly click off the bubble before engaging Acidmaw/Dreadscale.

Some groups use three tanks, switching after two Impale debuffs to the next tank in line.

Every 10 secs a debuff will appear on the main tank called Impale; tanks need to switch before 5 stack, 3-4 is ideal. (If the two tanks taunt when their debuff is at 8-9 seconds remaining, tanks should be able to maintain only a two-stack of the debuff throughout the fight.) Stacks wear off after 30 seconds, however Hand of Protection will removes the debuff entirely.

Snobold Vassals will also occasionally be thrown out to the raid by Gormok. The Snobolds will latch onto particular players, attacking them for a fair amount of damage and interrupting spell casting. The Snowbolds also throw Fire Bombs; all ranged DPS and healers must be on guard to immediately move out of the flames to reduce damage, as the fire hits for approximately 4,000 Fire damage per second.

Every so often Gormok will do a nasty stomp attack (Staggering Stomp)that may hit from anywhere from 9,000~ damage to 13,000~ to raid members within 15 yards and interrupting spell casting for 5 seconds. He seems to melee for approximately 13,000-17,000 damage on plate.

On 25 player heroic mode, some players are currently experiencing disconnects shortly after the start of the fight when the first Fire Bomb is cast. Currently, the full cause of this issue is unknown, but is suspected to be caused by an excess of data traveling between players due to addons, combined with the increased information for the Gormok encounter itself.

For loot, see Beasts of Northrend. 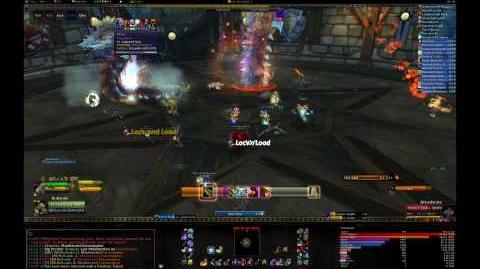 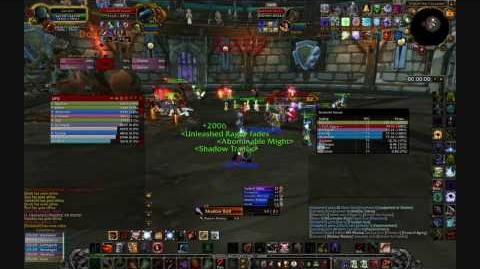 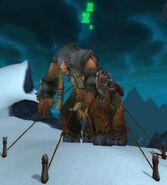 Gormok held tight during the preparations.