Grand Admiral Jes-Tereth is a level 62 human located in Stormwind Keep in the human city of Stormwind. She is the current leader of the Alliance fleet and is very loyal to Stormwind.

She is wearing a Theramore tabard.

Jes-Tereth is the apparent Grand Admiral of the Alliance forces. She spends her time in Stormwind discussing plans most of the time, rather than going out to sea. She is apparently now Daelin Proudmoore's replacement. However, since the Alliance currently has no true hierarchy at the moment, rank doesn't mean much when there are no people assigned under them. While there are Alliance ships, it is unknown if she has ships under her or not.[1]

However, the addition of Stormwind Harbor in Wrath of the Lich King clearly indicates that the Alliance is in possession of a sizable fleet. 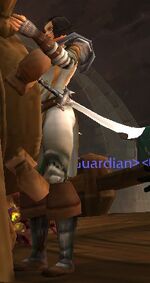 Jes-Tereth appears in Boralus behind the wheel of Wind's Redemption. After unlocking certain war campaigns, players can talk to her to travel back to Zandalar zones.