Chief Apothecary of the Society

Terrace of Light, Shattrath City[44.06, 34.7] or The Ring of Valor, Orgrimmar (pre-WotLK); The Apothecarium, Undercity

Deceased, beheaded by Alliance forces at the battle for the Undercity

Grand Apothecary Putress was a chief apothecary of the Forsaken's Royal Apothecary Society.

He played a vital role in the development of the "New Plague" the Forsaken sought to create. He was one of two known grand apothecaries in the Society, the other being Doctor Sintar Malefious.

In the lead-up to the release of Wrath of the Lich King expansion, Putress was an important figure during the second Scourge Invasion, who researched the zombie infestation from an apothecary camp in Shattrath City. Beginning on the fifth day of the outbreak, Horde players were able to undertake a quest in which he sent them as envoys to their racial capital with a severed head containing both the plague and an anti-plague, believing it to hold the secret of a cure.

It would appear that his research has led to his promotion as Grand Apothecary, as Master Apothecary Faranell is still alive and well in the Undercity and still leads the Royal Apothecary Society. When Warchief Thrall called for a meeting with other Horde leaders to discuss how to deal with the Scourge, Sylvanas Windrunner offers Putress' services to Thrall citing that his knowledge of the plague would make him a valuable asset in his campaign against the Lich King.

In Wrath of the Lich King, players help the Royal Apothecary Society develop the Forsaken blight, a new plague that not only affects living creatures but also causes fatal damage to undead beings. Shortly after the battle for Angrathar the Wrathgate begins and Dranosh Saurfang is slain by the Lich King, Putress appears on a cliff overlooking the battlefield and uses Forsaken catapults to unleash the newly developed plague on the unsuspecting forces gathered below. The losses on all sides are great, and perhaps the greatest loss is the death of the Alliance hero Highlord Bolvar Fordragon.

Soon after, it is revealed that Putress and several members of the Royal Apothecary Society had sided with Varimathras, who had secretly remained loyal to his nathrezim brothers and the Burning Legion while serving under Sylvanas Windrunner. Together, the two had orchestrated a coup d'état and forcefully taken control of the Undercity, nearly killing Sylvanas in the process. While Horde players band together with Thrall and Sylvanas to kill Varimathras and retake the Undercity, assaulting it directly, Alliance players join with King Varian Wrynn, embittered by the loss of Bolvar, and invade the city via the sewers to deal with Putress, and perhaps, Thrall himself.

Ultimately, though Varimathras and Putress are both defeated, and Jaina Proudmoore is able to prevent Varian from attacking Thrall, hostilities between the Horde and Alliance are renewed as the king of Stormwind declares war.

The subject of this section has been removed from World of Warcraft.

His first appearance was as a level 80 elite at the new apothecary camp on the Terrace of Light in Shattrath City during the Echoes of Doom Scourge Invasion, where he is involved with the following quests:

The Battle For Undercity 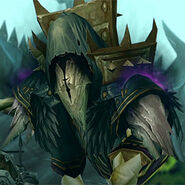 Putress oversees the destruction wrought upon the Wrathgate by the new plague.

Putress outside the Ring of Valor in Orgrimmar, just before the Scourge attack.