A green dragon is the adult phase of a green dragon's lifecycle, between adolescence and becoming a wyrm.

Green dragons are rare creatures, not often seen on the Physical Plane. They are creatures of dream and make their home on the plane of the Emerald Dream. This plane is not just a place of dream crafting, but an immense verdant realm of unspoiled paradise. Other flights often call greens "brothers and sisters of Dream" in respect to the realm from which they hail. The dragon has translucent, jewel-like scales that shine with a faint green light. Its eyes are glowing orbs of green-gold light, with no pupils or irises. Its sinuous and shining form flies through the air as if swimming through water.

Green dragons have no enemies in the Emerald Dream, but they know that the world of Azeroth is not as lucky or as peaceful. They are capable of fighting, but choose not to if there is any option other than their own death. If conflict is unavoidable, they try to neutralize foes with their breath weapon and leave the area. Some consider green dragons to be pacifists or weaklings. Those who have roused a green to combat fast learn the error of this opinion. After all, dreams and nightmares are not so very different.[1]

"Emerald" and "veridian" is usually associated with the green dragons.

From Manual of Monsters. 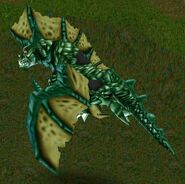 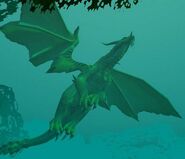 In World of Warcraft. 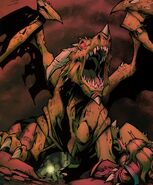