This article is about the 10 and 25-man versions of Grobbulus introduced with Wrath of the Lich King. For the original 40-man raid boss, introduced in Patch 1.11,, see Grobbulus (original).

Grobbulus is the second boss of the Construct Quarter in Naxxramas.

Commander Eligor Dawnbringer: "Grobbulus, the first of what was to be an army of flesh giants. It carried the plague slime of Naxxramas within its body, injecting the living ooze into the bodies of its foe. The recipient of this foul injection would usually flee to his allies, bringing them down with him."

Grobbulus will drop these below him every ~15 seconds. They will expand over time and last 75 seconds. They deal 4,250 Nature damage per second to anyone within.

Deals 11875 to 13125 Nature damage to enemies in front of Grobbulus in a 45 yard cone. Enemies hit by Slime Spray summon a Fallout Slime.

A blob that deals 2,000 Nature damage every 2 seconds, in a 10 yard range AoE. Should be picked up by an offtank.

Cast on a random raid member every ~20 seconds with the frequency increasing as Grobbulus' health drops. After 10 seconds, or if cleansed, the affected player will deal 8075 to 8925 Nature damage to everyone within 20 yards (including him or herself) as Mutagen Explosion and create a poison cloud beneath them.

Grobbulus will drop these below him every ~15 seconds. They will expand over time and last 75 seconds. They deal 2,000 Nature damage per second to anyone within.

Deals 6300 to 7700 Nature damage to enemies in front of Grobbulus in a 45 yard cone. Enemies hit by Slime Spray summon a Fallout Slime.

Cast on a random raid member every ~20 seconds with the frequency increasing as Grobbulus' health drops. After 10 seconds, or if cleansed, the affected player will deal 8075 to 8925 Nature damage to everyone within 20 yards (including him or herself) as Mutagen Explosion and create a poison cloud beneath them.

Grobbulus is not a terribly difficult encounter if you are able to kill Patchwerk. You will want two tanks.

Grobbulus should be picked up and taken to a wall. He should NEVER be facing the raid or the resulting fallout slimes will spell a wipe. The main tank should slowly kite Grobbulus around the edge of the room, moving as Grobbulus places poison clouds. The offtank should pick up fallout slimes that spawn from the main tank being hit and DPS should take them down quickly. Do not dispel/cleanse the Mutating Injection; affected players should get away from the raid to near an existing poison cloud and will need healing after 10 seconds. Space should be conserved by keeping poison clouds near each other. You have nine minutes.

Your main tank should start the encounter by pulling Grobbulus to one of the outside walls of the room. The tank should move Grobbulus around the outside edge of the room each time Grobbulus drops a poison clouds (you will likely complete at least one full circuit of the room during the fight). Raid members hit by Grobbulus' Mutating Injection should move next to the last cloud he dropped so the new cloud they create will merge with Grobbulus' cloud. This conserves space within the room for the ranged and healers. However, with this positioning strategy the tank must move Grobbulus a fair distance every time a cloud is dropped or else the melee will be clipped by the mutating injection going off, though Grobbulus should not be moved so far that ranged DPS are out of range of Grobbulus while waiting for an Injection to go off.

Ranged and healers should stand on the inside of the room, moving toward the outside temporarily when they are hit with the Mutating Injection. Melee may want to try to hit Grobbulus from the side (it will look as though they are attacking his boot) so they do not run through his poison clouds when the tank moves him. However, melee should absolutely not stand in front of Grobbulus at any point for risk of spawning an additional fallout slime.

Designate an off-tank to pick up the fallout slimes as they spawn. At least a couple ranged DPS should switch to them when they spawn so the off-tank doesn't get overwhelmed. Like the rest of the raid (with the exception of the main tank), the off-tank will occasionally be hit by Mutating Injections, and in these cases it may be helpful to have a Hunter misdirect slimes onto him.

Towards the end of the fight, Grobbulus will be using his Injection very frequently. Burst effects on long cooldowns (particularly Bloodlust) should be saved until late to help finish Grobbulus off. This part of the fight depends almost entirely on your ranged DPS, as melee will have great difficulty dealing any significant damage to Grobbulus due to the frequency with which they are injected.

Ranged and healers stand in the middle of the room and move only to reposition themselves closer to the MT and Melee DPS as they go around the room.

An OT needs to pickup Fallout Slimes as they spawn. These should only spawn from the MT - they are from Grobbulus' spray. Melee DPS needs to be sure they are on his side; if they get hit with his spray, more slimes will spawn.

To begin the pull, have the tank stand on the grating by the ramp. The boss will body pull from here. Everyone else needs to stand back from the ramp.

The tank will then begin to kite the boss counter-clockwise keeping him on the grating. The best pace is for the tank to toggle their walk/run key to make them move at a walk speed. Once on the other side of the grate from the ramp pulling position, go just a bit further out to be even with ramp, then turn in and head straight for the ramp. Once to the ramp get back onto the grate and continue as before.

When someone gets injected they will run behind the tank, where no clouds from Grobbulous are, and to the wall. This ensures that everyone knows where to go, that there is not a buildup of clouds, and that the group is not closed in on by clouds.

By the time you get to the ramp again after kiting the boss around the grate and across the top of the room to the ramp, the first clouds emitted by Grobbulus will have dissipated allowing you to continue kiting him on the grate.

The difference with this strategy is placement.

The strategies above are successful if you have enough DPS. Those above have you against the wall with a string of clouds emitted by Grobbulus along the wall and a second string of clouds next to the ones along the wall placed by players that get injected. That is a total of 2 wide for clouds. As the fight continues, the back wall, where you begin the pull above, becomes clear, but you have a string of player placed clouds strung across the mid room so you are not able to get to the back wall to place player clouds. The result is they build up coming closer and closer to the group eventually giving players nowhere to run to place their clouds if DPS is not downing Grobbulus fast enough. 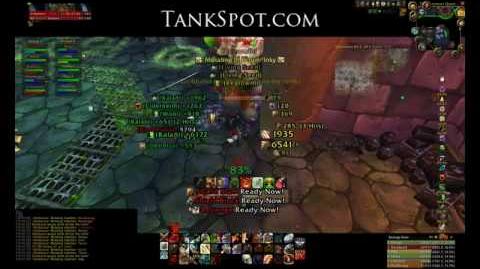 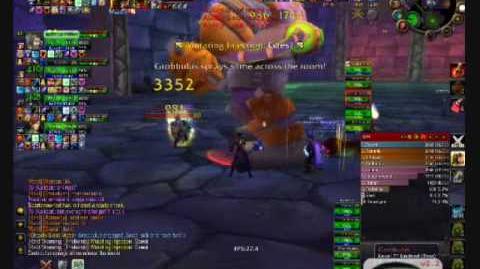