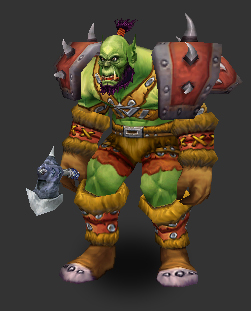 Grunts were the first level of warrior in the service of Orcish Horde during the First War. Trained for close combat, these soldiers make excellent fodder for wading through human forces. Use of the axe and shield is their speciality, and they are hearty fighters with a taste for blood.[1] (W1ManO 48)

Those orcs who distinguish themselves enough in the arts of war to be trained as grunts epitomize the merciless spirit of the Horde. Equipped with mighty axes and battle-worn armor, they are prepared to fight to the death. Devoted to the Horde and to their clans, the grunt lusts for battle — wanting nothing more than to wade into the field of carnage and die a bloody death surrounded by the bodies of his fallen enemies.[2] (W2BnetMan 69)

Grunts are the first and last line of the Horde's defense. These powerful fighters arm themselves with mighty battle-axes and display all of the savagery and cunning of their race. In past generations, grunts were characterized by their depravity and brutality. But now, under the visionary leadership of Thrall, they more closely resemble their savage, yet noble warrior ancestors.[3] (W3Man 86)

In Warcraft I, II, and III they are voiced by Bill Roper. 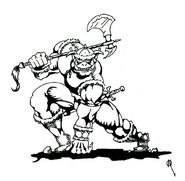 A grunt from Warcraft I.

Grunt icon from Warcraft I. 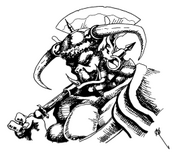 A grunt from Warcraft II.

In Warcraft I and II

During the First and Second Wars, the Grunts acted as the main foot soldiers of the Horde and functioned as the Orcish counterparts of the human Footmen.

In Warcraft III, grunts are stronger and have slightly less armor than footmen, but cost more food and resources.

Grunt was an old honor system title available to Horde characters; being a Grunt allowed characters to purchase a Team insignia trinket.

Grunts are guards in orcish Horde cities and towns such as Orgrimmar and Razor Hill, but also in Horde orcish settlements throughout Azeroth and Outland. Curiously, their signature horned helmets are absent.

Orc Grunts are used as the pawns in the Karazhan chess event.