WoWWiki
Register
Don't have an account?
Sign In
Advertisement
in: Articles to clean up, Articles that need to be wikified, Pages using deprecated templates,
and 2 more 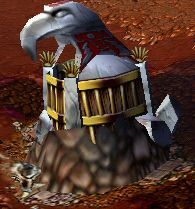 The gryphon aviary is a dwarven building used to raise and train gryphons.

An homage to the legendary beasts housed within, the colossal aspect of the gryphon aviary looms over all that it surveys. Hewn from solid rock by the dwarves of Northeron and Hinterlands, their aviary inspired dread in the hearts of whomsoever these Gryphon Riders call foe. Deep inside these massive structures are the gryphon aviaries and the dwarven workshops where saddles and harnesses are crafted.

Most sacred to the dwarves is the enchanted forge that lies at the heart of each Aviary. It is here that the magical weapons known as Stormhammers are fashioned. A Stormhammer, when thrown, strikes with the fury of lightning and the force of thunder. This destructive weapon, combined with the indomitable spirit of the Gryphon Riders, justifies their position as masters of the skies.[1] (W2Man 57)

The greatest achievement to come from the alliance of dwarves and humans is quite possibly the taming and training of the mighty, noble gryphons. Following years of failed attempts, dwarven riders finally succeeded in gaining the trust of the aloof gryphons. Together with the humans, dwarven riders gave the greatest care, providing lodgings that would most closely resemble the gryphons’ aeries among Lordaeron’s Aerie Peaks.[2] (W3Man 76)

The main gryphon aviary can be seen at Aerie Peak in the Hinterlands in World of Warcraft.