Gryphon riders are the air power of the Alliance, the men who fly through the air and risk their lives in an aerial blitzkrieg. To a man (or woman), they describe their job as the most exhilarating in the Alliance. Wearing a breastplate and a jaunty leather cap, the stout, friendly Wildhammer dwarf stays close to his steed. In combat, the gryphon rider's tactics are surprisingly similar to those of normal cavalry; they charge in, strike a blow, and get out before the opponent can launch a counterattack. As one gryphon rider puts it: "If they've got no spellcasters or missile troops, battle's a picnic." They usually use an axe as a weapon, and they are never without their stormhammers.[1]

During the Second War, dwarven gryphon riders came from the ominous and foreboding peaks of Northeron. Mounted upon their legendary beasts and wielding the mystic stormhammers forged deep within the secret chambers of their aviaries, these feral dwarves fear no enemy — and rely upon no friend. They have allied themselves only with the elves of Quel'Thalas, distrusting both their dwarven cousins and the humans alike. When the call to battle is sounded, however, they can be counted upon to fight alongside any who oppose the Horde.[2]

The daring dwarves of the Wildhammer clan have responded once again to the call and brought their mighty gryphons of the Aerie Peaks to aid the besieged Alliance in its time of need during the Third War. Armed with their trusty, lightning-powered stormhammers, the fearless hearty wild dwarves seek to keep the skies of Lordaeron free from enemy forces. The proud gryphons share their riders' implacable resolve and stand as noble symbols of the Alliance’s fortitude.[3][4] 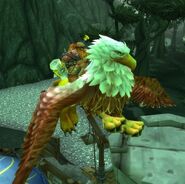 A Gryphon Rider Guard in Outland