War against the Lich King

Between the Rampart of Skulls and Deathbringer's Rise in Icecrown Citadel

The Gunship Battle is an aerial battle between the gunships Skybreaker and Orgrim's Hammer around the spire of Icecrown Citadel. The encounter has some fun elements, and most guilds and PuGs manage it easily, therefore it is often referred to as the "Lootship Battle".

All NPCs have the same abilities regardless whether they're Alliance or Horde, only their designations change.

All enemy NPCs except the Commanders and the Battle-Mage/Sorceror gain experience the longer they are left alive, starting from Regular and progressing to Experienced, then Veteran, and finally Elite. Depending on rank, damage and attack speed are increased.

Due to this progression it's a good idea to kill enemy NPCs quickly.

Both ships deal siege damage to each other. The one going down first loses the battle. Siege damage is dealt to the enemy ship by firing the guns. The enemy gunship deals siege damage to the player's ship by shooting rockets.

Besides this siege battle, the players have to deal with enemy boarding parties and also need to send an offensive boarding party on the enemy ship from time to time. Additionally, the rocket teams and other enemy ranged damage dealers keep strafing all players. The rockets can be avoided by moving away from their target marks (similar to Mimiron's rockets, but less damaging than these), the ranged damage can simply be healed through.

The raid should be split up in a (smaller) offensive team which includes enough damage dealers (melee preferred) to man the guns, one tank and an appropriate number of healers (1 in 10 player, 2-3 in 25 player), and a (larger) defensive team including everyone else.

Only the offensive team needs the jet packs provided by the engineer NPC on the player's ship, but usually the whole raid finds them interesting enough that everybody takes one. They need to be equipped before entering combat, as they are a clothing item (shirt) and cannot be equipped once in combat. The jump pack is used by 'using' it and selecting a destination to jump to (this is usually "practiced" intensely before the battle starts).

The defensive team is concerned with keeping the player's gunship free of enemy boarding parties and with killing enemy ranged attackers.

Enemy boarders who don't have players on their aggro list instead attack the player's gunship with burning pitch, which deals very high amounts of siege damage. Therefore, all members of the enemy boarding party must be tanked immediately. Ranged AoE is highly effective. Due to their whirlwind, melee must be careful until all Sergeants are dead.

The offensive team consists of melee attackers, a tank, and dedicated healers for that tank.

The offensive team fires the guns until they're frozen. This freeze occurs every 45 seconds or so. When the guns are frozen, they cannot fire. They're unfrozen by killing the mage on board of the enemy ship. The offensive team leaves the guns and jumps over to the other ship (the healers can actually stay on the edge of their own ship). The tank needs to keep the enemy commander busy. The enemy commander gains a stacking buff while in combat, thus the offensive party must be quick to kill the mage (depending on tank gear 20-30 seconds). After the mage is dead, they jump back and resume firing the guns.

Even if the boarding party is fast, they should not try to kill a few extra mobs on the enemy ship - it is more efficient to quickly man the guns again.

The offensive team must be careful not to leave behind anything which could keep the enemy commander in combat (totems, pets or the like). Back on the player's ship, the offensive team should move away from the enemy ship to make sure the Commander gets out of combat.

The ship's guns have two different attacks: a normal shot bound to "1" which deals 1000 siege damage. Firing a normal shot also generates between 6 to 10 heat, which fills up the heat gauge on the gun (begins at 0, maximum 100, losing 1-2 heat per second while not firing). The second shot is bound to "2". It's a heated shot which immediately expels all the accumulated heat on the gun and deals 1000 siege damage plus extra damage for each unit of heat, up to just under 10000 with a nearly filled bar. If the heat meter reaches or exceeds 100, the gun overheats and both shots are locked for five seconds until all heat has been drained.

Both types of shot not only deal siege damage but also damage enemy mobs, thus shots should be angled at the rocketeers/ranged NPCs.

Keep everything this same, except for the Offensive squad. If the tank and his/her healer can hold the boarding party long enough, all of the DPS can jump to the far boat to down the enemy mage faster, resulting in a faster battle and more time to DPS the enemy boat down. Make sure the tank and healer can handle the mobs long enough for your raid to get over there and back without dying. Try kiting them over to the leader to have him assist if needed.

First squad assisted
Kor'kron Primalist says: Thank the spirits for you, brothers and sisters. The Skybreaker has already left. Quickly now, to Orgrim's Hammer! If you leave soon, you may be able to catch them.
Kor'kron Invoker says: This should be helpin'ya!
Kor'kron Invoker summons a Kor'kron Battle Standard. 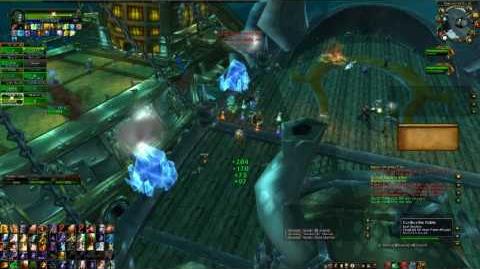 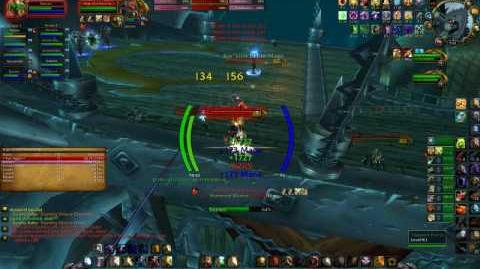 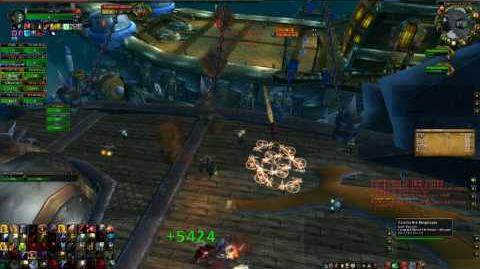 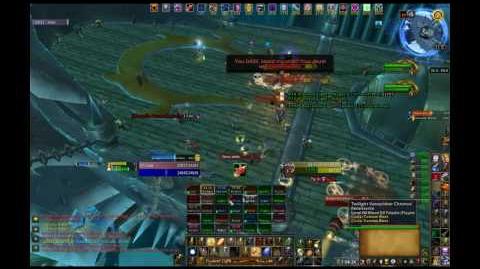 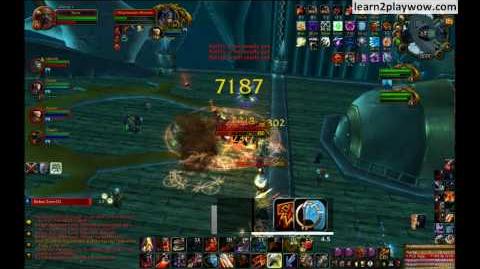 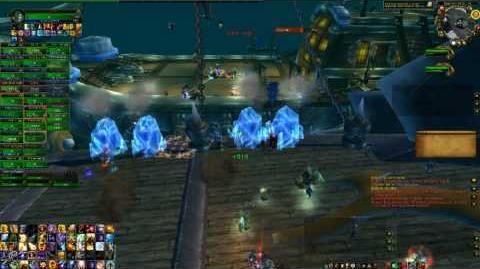 Icecrown Citadel: The Frozen Throne |  Blizzard Entertainment
As they continue their ascent, the Alliance and Horde heroes ultimately end up outside of the citadel where their hatred for one another erupts into a battle for dominance over the Rampart of Skulls. Players will join in battle alongside High Overlord Saurfang on the Orgrim's Hammer gunship or Muradin Bronzebeard on The Skybreaker in a unique encounter. Each faction will protect its gunship and try to destroy the other one in a back-and-forth battle to see who is truly worthy of facing the Lich King.