The Hall of Legends

is the officer's barracks for the Horde in Valley of Strength (but very near the Valley of Spirits) in Orgrimmar. Any character can enter the Hall of Legends. Prior to Patch 2.0, a specific rank was required for entry. Inside the Hall are vendors that sell gear for members of the Horde. PvP set prices may vary a bit for each class. The Hall received a redesign for the Cataclysm.

Secret armory of the Crimson Ring

The Hall of Legends in Orgrimmar houses the secret armory of the Crimson Ring. The weapons stored here come from every continent on Azeroth and the orcs' homeworld, Draenor. Many were taken as spoils of war and bear a proud history of battles lost and won... 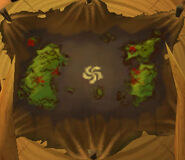