Harrison Jones is an archaeologist and explorer, much like his namesake.

Jones first appears as a level 70 NPC located inside Zul'Aman. Upon entering Zul'Aman, the inner gate into the city is shut; speaking to Jones will cause him to don his hat (another Indy trademark), shout out and run over to the gong near the door.

He and five players need to hit the gong (a channeled effect, like summoning) until it stops moving; shortly thereafter the gates will open, beginning the 20-minute timed event.

Though previously thought to have been killed by the sudden ambush of Amani trolls, Harrison Jones returns in Northrend. He can be found in the crypt of the Drakil'jin Ruins in eastern Grizzly Hills.

Jones plays a larger role in Cataclysm, providing players with a series of quests in Uldum and also appearing in Stormwind Keep as the city's archaeology trainer.

Stormwind Keep
Archaeology is the search for fact. Not truth.
If it's truth you're interested in, Cuddy Nordlinger's Philosophy class is right down the hall.
Janric Moller, Lana Dubing and Darnella Winford laughs.
So forget any ideas you've got about lost cities, exotic travel, and digging up the world.
Seventy percent of all archaeology is done in the library. Research. Reading.
We cannot afford to take mythology at face value.
Lana Dubing flutters her eyelashes at Harrison Jones.
Ahem! Well... ah, next week: "Tanaris." Starting with the excavation of Broken Pillar by Marvon Rivetseeker in Year 22.
I will be here doing research if anybody's got any problems for the next hour and a half.
Zul'Aman
Puzzling. They're clearly harnessing great power from their sacrifices. But for what?
Suit yourself. At least five of you must assist me if we're to get inside. Follow me....
According to my calculations, if enough of us bang the gong at once the seal on these doors will break and we can enter.
I've researched this site extensively and I won't allow any dim-witted treasure hunters to swoop in and steal what belongs in a museum. I'll lead this charge.
In fact, it would be best if you just stay here. You'd only get in my way....

His name is a reference to actor Harrison Ford and one of his better known roles, world-renowned adventurer Indiana Jones. His Horde counterpart, Belloc Brightblade, is a reference to Indiana's nemesis in Raiders of the Lost Ark, René Belloq.

"Cuddy Nordlinger" is a reference to Luke Cuddy and John Nordlinger, editors of the collection of essays, "World of Warcraft and Philosophy". 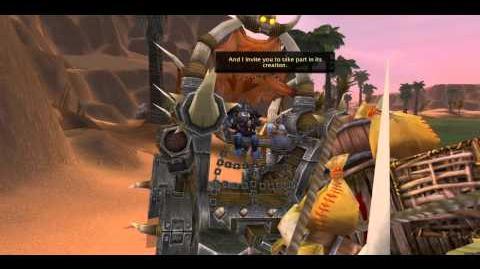