Swift, nimble, and elegant - the perfect mount to represent the Blood Elves.[1] (TCGWG 150)

When Kael'thas led his followers to the ruined world of Outland, the vibrant hawkstriders that were brought with them proved to be welcome reminders of the blood elves’ beauteous home in Quel'Thalas. Valued for their trustworthiness and speed, these colorful avian creatures embody the inherent splendor of the forests within the blood elven kingdom. While tragedy has befallen Quel’Thalas in recent years, the hawkstriders remain an integral part of the elves’ day-to-day lives.[2]

These mounts give a 60% speed increase on land. You can purchase these mounts from Winaestra <Hawkstrider Breeder> at Thuron's Livery in Eversong Woods so long as your character has riding skill of 75 (obtainable at level 20). If you are playing as any race other than a blood elf, you will also need to have Exalted​​ reputation with the Silvermoon City. 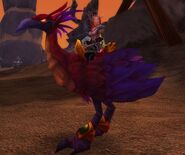 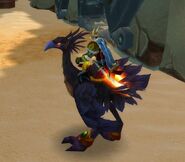 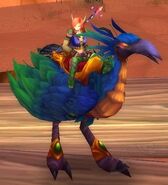 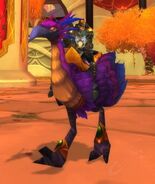 These mounts give a 100% speed increase on land. You can purchase these mounts from Winaestra so long as your character has riding skill of 150 (obtainable at level 40), and are restricted similarly to the apprentice mounts above. 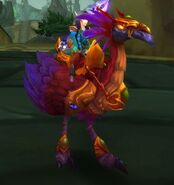 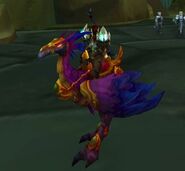 The Swift Warstrider is available from

Raider Bork <Mount Quartermaster> in Orgrimmar for 2,000 Honor points. You do not need to have exalted reputation with the Silvermoon City to purchase it. 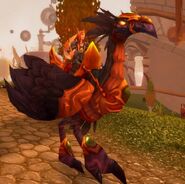 The Silvermoon Hawkstrider and Swift Red Hawkstrider can be purchased from the Argent Tournament. You must have completed

Champion of Silvermoon City or be a blood elf to gain access to this quartermaster.

The Sunreavers offer yet another Hawkstrider of their own to characters that are at Exalted​​ Level. 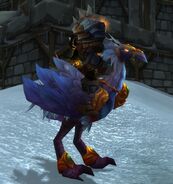 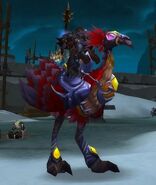 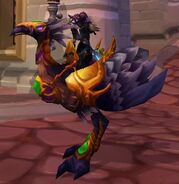 The Swift White Hawkstrider drops (rarely) from Kael'thas Sunstrider in the Magisters' Terrace on heroic mode. Both Alliance and Horde can acquire this mount. 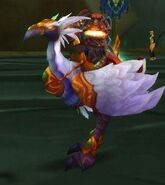