Were you looking for the alternate timeline version of

Hellfire Citadel is the headquarters of the fel orcs of Outland, a nearly impenetrable bastion that once served as the base of operations for the orcs throughout the First and Second Wars. Kargath Bladefist and his fel orcs now make their home in the citadel.

Hellfire Citadel was originally referred to as simply "the Citadel", and was built as the fortress of Blackhand, the first Warchief of the Horde. After the orcs' abandonment of the elemental spirits, the area around it became known as Hellfire Peninsula, and thus the citadel was given its current name.

The fortress was intended to be the primary staging ground of the military forces of the Horde, whereas the captured Temple of Karabor (now the Black Temple) would be used for meetings of the Shadow Council. It was from this location that the final battle against the draenei, at Shattrath, was organized and carried out. After the creation of the Dark Portal, the Horde was organized at Hellfire Citadel and marched up the Path of Glory to what they called the "Stair of Destiny".

Its fate after the destruction of Draenor was unknown until recently; it was presumably abandoned until Kargath Bladefist, Warchief of the Fel Horde, and the fel orc minions of Illidan Stormrage took possession of the Citadel as their base of operations. Illidan also used the citadel as a prison for Magtheridon, the former Lord of Outland; it is here that Illidan's fel orcs take the blood of Magtheridon and use it to create more fel orcs, much as the blood of Mannoroth was used to corrupt the original Horde.

Hellfire Citadel from the WoW site:

On the blasted world of Outland near the Dark Portal stands the Hellfire Citadel, a nearly impenetrable bastion that served as the base of operations throughout the First and Second Wars. For years this gargantuan fortress was thought to be abandoned... until recently. This very much operation battle station has become inhabited by marauding bands of red, furious fel orcs. Where this savage new breed came from is a mystery, but whats worse is that their numbers seem to be growing. Hellfire Citadel is the first new dungeon that players will encounter in Outland. It will consist of three complete dungeon wings designed for 5-man groups, as well as an exciting raid encounter.

Some info posted by Tigole on the WoW forums [1]:

This is the first dungeon players will encounter in the expansion. It lies in Hellfire Peninsula, the zone just beyond the Dark Portal. We're planning on making this a winged dungeon. Right now, two of the wings are scheduled to be lower level level up wings (for players leveling to 70). One of the wings is slated to be a maximum level 5-person dungeon. And lastly, there's Magtheridon's Lair, a raid wing similar to Onyxias Lair in size and scope what I like to call a quick raid. Of course, during the development cycle this could all change. Same goes for the Beta. But thats how we're approaching this dungeon currently.

Very similar to Onyxia's lair. A handful of trash and then a big raid boss. Level requirement will be 70. 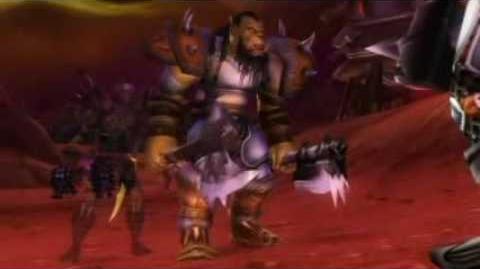