Edit this page
watch 01:53
'World Of Warcraft': Patch 6.2 Hellfire Citadel
Do you like this video?
Play Sound

Were you looking for the version of

The alternate timeline version of Hellfire Citadel in Tanaan Jungle of Draenor was introduced in Patch 6.2 and appeared on the PTR on April 13, 2015. Players have speculated this is the last raid of the expansion.

From Blizzard's Patch 6.2 Preview.:
When Garrosh encouraged Grommash to begin construction of this massive stronghold at the heart of Tanaan Jungle, to serve as a staging ground for the assault of Azeroth, he even suggested the name Hellfire, pulled from a different time and a different land. He dreamed of seeing mighty orcish iron towering over an unblighted landscape, so very different from the wasteland he had known in Outland. But even as times change, so too do they stay the same.

Located within the dark heart of Tanaan Jungle, Hellfire Citadel looms over the landscape and can be seen from nearly anywhere within the area. Having braved the dangers of Highmaul and Blackrock Foundry, the heroes of Azeroth and Draenor now must assault this fel-twisted bastion—the horrors within pose an unrelenting threat to everyone on Azeroth. 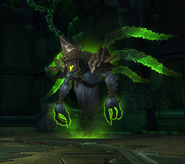 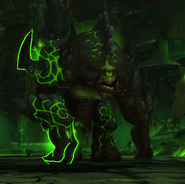