The Hinterlands, located in the Northern part of the Eastern Kingdoms, are probably most notable for the Wildhammer dwarves who make their residence at Aerie Peak in the west. The Wildhammers have always been staunch allies of the Alliance. It is from the Hinterlands that these dwarves find and tame their world-renowned gryphons. The Razorbeak gryphons roam wild in this region.

Also in the Hinterlands is one of the last remaining settlements of the high elves in Lordaeron at the Quel'Danil Lodge.

The Hinterlands are also home to a large population of forest trolls, which are divided into three separate tribes. The Revantusk tribe is the only one of the three that has declared sides in the Horde/Alliance conflict and support the warchief Thrall of the Horde. The Vilebranch tribe holds residence in the massive troll city of Jintha'Alor as well as the Altar of Zul while the Witherbark tribe holds the smallest influence, hailing from the temples of Shadra'Alor.

In the northern part of the region is the ancient, massive tree, Seradane where the agents of the Green dragonflight have been corrupted. A massive portal on the side of the tree connects the servants of the Aspect Ysera to her own realm, the Emerald Dream.

The earliest inhabitants of the Hinterlands were the forest trolls of the Amani Empire. This ancient empire stretched across much of eastern Lordaeron with the Hinterlands at its heart. Many great troll cities were built in this region, and their colossal ruins still testify to the once-great empire. The great empire felt the beginnings of its doom when the exiled high elves arrived in Lordaeron. The trolls, though cunning and great in number, were no match for the arcane fires of the elven mages. The elven armies pushed the trolls out of the northern reaches of their empire and built their own cities in their newly acquired country: Quel'Thalas.

The trolls were forced to retreat to their bastions in the Hinterlands to the south, where they would remain, wary of the elves and their magic, for several generations.

When the humans of Arathor began organizing themselves into a true political entity, the trolls decided to prevent them from gaining a foothold in the political geography of the region. The Amani trolls massed their power in one last bid against their adversaries, but it was for naught. The high elves, seeing a way to be rid of the troll menace once and for all, taught the humans the secrets of the arcane arts. The trolls were no match for the combined armies and mages of the humans and high elves and they were utterly defeated. This defeat marked the last time the Amani forest trolls would join together as a single nation. Scattered and defeated, the remnants of the Amani returned to their homes in the Hinterlands. Because of their terrible loss, their well-established civilization was virtually gone, and their great monuments and temples began to crumble with no one to keep them up.

The next time the Hinterlands would play a significant role in history was the coming of the Wildhammer clan of dwarves. After the War of the Three Hammers, the Wildhammer dwarves forsook their subterranean homes and traveled north to the Hinterlands where they built dwellings above the ground at the city of Aerie Peak. They adopted a society that focused less on metalworking and mining and more on a closeness with nature. They were and remain unique among dwarves (and indeed, all races traditionally of the Alliance) in their cultivation of shamanistic practices. The dwarves also soon realized they had a strong affinity for the wild gryphons of the Hinterlands. Soon they trained gryphon riders who would fly into battle wielding the powers of the storm. So strong was the bond between the dwarves and the gryphons that the dwarves constructed a enormous monument in the likeness of a gryphon at Aerie Peak. Eventually, these gryphon riders would become perhaps their most valuable gift to the Alliance. Upon their arrival, the dwarves found themselves immediately at odds with the trolls of the Hinterlands. Though there are no accounts of open hostility between the two, a lasting mutual disdain settled upon the two factions.

By the time of the Wildhammer clan's arrival in the Hinterlands, the trolls had recovered some of their numbers after the devastating war. These remnants split themselves into three separate tribes. The Vilebranch tribe was the strongest and held the ancient Amani bastions of Jintha'Alor and the Altar of Zul. The Witherbark tribe was weaker than the Vilebranch, residing amongst the old temples of Shadra'Alor and the ruins of Hiri'Watha. The weakest of the three tribes was the Revantusk tribe. The Revantusk trolls were nomadic and called no place their home. For many hundreds of years, this was the state of affairs for the trolls.

When the ravenous Horde crashed through the Dark Portal and sacked Stormwind, the omens of hope began to glimmer for the trolls. When the orcs invaded a second time, they plowed through Khaz Modan and into Lordaeron. The three tribes saw the Horde as the means to their redemption. The forest troll tribes joined the Horde seeking to destroy their old enemies, the elves and the humans. They even managed to invade Quel'Thalas, but the Horde was ultimately defeated. Seeking to avoid the orcs' fate of imprisonment and slavery, the trolls abandoned their allies and returned to the Hinterlands, their dreams of former glory shattered. Even though the trolls were defeated in the war, their role in the greater scheme of things was not quite spent.

During the same war, the Wildhammer dwarves sided with the Alliance, horrified at the defeat of their ancestral homeland of Khaz Modan. They sent their powerful gryphon riders into battle against the Horde. Perhaps without them, the Alliance would not have won.

In the events that transpired in Lordaeron during the years to come, the Hinterlands were little affected. The Wildhammer dwarves took in some refugees fleeing the destruction wrought by the Scourge, and many forest trolls moved south as well.[1]

It was only after the defeat of the Burning Legion in Kalimdor that the Hinterlands began to grow in importance once again. After the Horde had established a new homeland in Kalimdor, emissaries were sent to the Eastern Kingdoms seeking allies. Some of these emissaries came to the trolls of the Hinterlands seeking to renew the friendships of old. The Vilebranch and the Witherbark refused outright, but the Revantusk trolls, seeking to raise their position, reluctantly agreed. Thereafter, the Horde aided the Revantusk in building their first settlement after centuries of wandering, Revantusk Village. Because of the aid they received, the Revantusk trolls are now staunch allies of the Horde.

The Wildhammer dwarves at Aerie peak stood witness to the destruction around them. They watched helplessly as the humans and elves were destroyed by the Scourge. Though the Scourge has not yet reached the Hinterlands, the dwarves remain on the edge of this frontier. This decision drove The Wildhammers to distance themselves from the Alliance; however, in recent times they have rejoined the Alliance. In fact, their stronghold in Shadowmoon Valley and its other territories are places of the Alliance.

Horde
From Durnholde Keep in the Hillsbrad Foothills, head northeast. Eventually you should come to a break in the mountains ([84, 32] [1]). Head through the pass into the Hinterlands. The Horde flight path is in the far east of the zone, on the coast. Make your way across country to the east until you find the road at Hiri'watha. Follow the road east almost all the way to the cliffs, then take the trail branching northeast (away from the troll city Jintha'Alor). The trail should take you to a path leading down the cliffs. Once on the beach, head to the south. You will find the Horde outpost, Revantusk Village.

Alliance
From Southshore, head northeast. Eventually you should come to a break in the mountains ([84, 32] [2]), northeast of Durnholde Keep. Head through the pass into the Hinterlands. The Alliance outpost is very close to the entrance to the zone: just head straight north along the road and you will come to Aerie Peak.

After the Cataclysm expansion, the Hinterlands level range will change from 40-50 to 30-35.[2]

While there are no instanced dungeons in the Hinterlands, the zone is notable for its huge outdoor micro dungeon, Jintha'Alor.

The Hinterlands are the location of Seradane, one of the four Great Trees leading to the Emerald Dream and guarded by the four Emerald Dragons. The three others are in Ashenvale, Duskwood, and Feralas.

The Hinterlands are home to several characters of note. At Aerie Peak, Falstad Wildhammer and Gryphon Master Talonaxe seek aid in locating a young gryphon. At Revantusk Village, Primal Torntusk attempts to locate her missing mate, and Huntsman Markhor sends bold adventurers into the deepest part of the wilds in search of dangerous wildlife.

The Hinterlands, Northeron, and the Aerie Peaks

Some speculate that the Hinterlands were the area known as Northeron or the Aerie Peaks before the Second War, and were later renamed. Others believe the terms have retconned due to the lack of mention in recent lore and refer to what is now the Hinterlands. It is also possible a different relationship between the Hinterlands, Northeron, and the Aerie Peaks exists, such as being subzones within one another, neighboring zones, or possibly having no relationship whatsoever and being separate zones that have yet to show up in World of Warcraft. 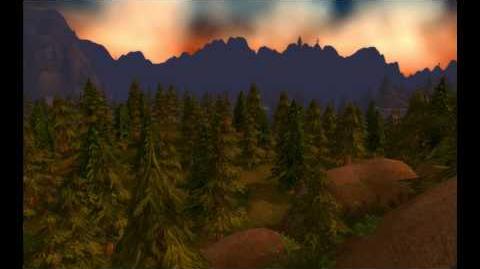