Hippogryph mounts became available with Patch 2.3.0. There are now seven epic quality mounts are currently available to players. Of these, one is exclusively attainable by Alliance players only. 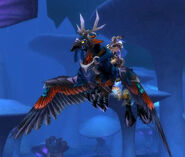 Two hippogryphs can be purchased from the Argent Tournament, each with different requirements.

to anyone who is exalted with The Silver Covenant (Alliance only. Horde characters who are Exalted with the Sunreavers are offered the opportunity to buy the Sunreaver Dragonhawk for 150 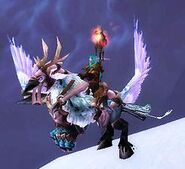 The Flameward Hippogryph is obtainable only through completion of 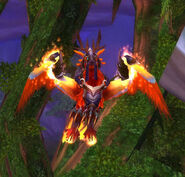 The Blazing Hippogryph can be obtained through the Wrathgate TCG expansion set.

The Corrupted Hippogryph can be obtained through the Crown of the Heavens TCG expansion set. 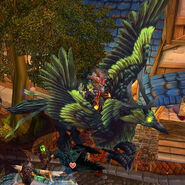 Added in Patch 5.4.1, the Emerald Hippogryph is one of 4 mounts available through the new Recruit a Friend program (there are also 4 pets to choose if you do not want, or already own the mounts).

The upgraded Recruit A Friend allows you to email friends and family members Starter Edition activation keys for World of Warcraft from directly within the game. To get started, simply open up your in-game Friends List and click the new Recruit A Friend button. Similar to the old system, after a recruited friend purchases 1 month of World of Warcraft game time, the veteran player (aka the recruiter) will get 1 month of free World of Warcraft game time. In addition, approximately one week after a recruit successfully purchases two months of game time, the veteran player will be able to select one of the following epic pet or mount rewards to permanently add to their collection.