This article is about mostly general combat hit rating. For the past spell specific version that was collapsed into general hit rating with

Hit refers to physical damage that occurs as a result of an attack made with melee or ranged weapons. 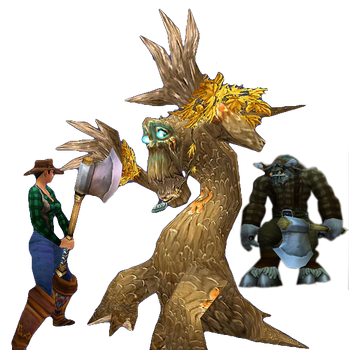 Removal with Warlords of Draenor

Hit remains as a game mechanic for hit mitigation, but was removed as a stat bonus for items with the

If the difference between the mob's level and your level is less than or equal to 2, then the formula for calculating your base miss rate against that mob is:

If the difference between the mob's level and your level is greater than 2, then the formula for calculating your base miss rate against that mob is:

Applying these formulas gives the following base miss rate for a Level 80 character:

Thus, if you are a Level 80 character with no talents increasing your chance to hit, you need a Hit Rating of 247 (8.03%) to never miss a shot against a Level 83 boss (or skull mob) with a special attack or single-wield auto-attack (see hit rating cap below).

Melee attacks divide into two categories: auto-attacks (white attack/damage) and special attacks (yellow attack/damage). Attacking a mob from behind removes parry and block from both tables, provided the attack is more than 0.5 yards away.

In the context of stats, the term "cap" refers to the point at which equipping more of a particular stat will have no additional value. For hit rating the cap usually discussed is in regards to raid bosses. For example, once you reach or surpass the hit cap, you will never miss an attack against a raid boss unless you are under the effect of some debuff that reduces your hit chance (for example, Archavon the Stone Watcher's gas cloud).

Note: For DPS exclusively doing heroics and not planning on raiding at all, the hit cap is lower, since heroic bosses are never higher than 82 (see "Calculating Miss Rate", above).

[Heroic Presence] is a draenei passive ability that give draenei a 1% reduction in hit rating requirement.

Each melee auto attack made by characters against mobs will result in one of the following (in order of precedence):

It is actually quite difficult to be crit capped without trying. This is one reason why it's important to maintain a balance of stats, and not to "stack" any one stat indiscriminately.

Each melee special attack made by characters against mobs will result in one of the following in order of precedence:

The system is exactly the same as normal attacks, except the miss chance is reduced to 8%, whether dual-wielding or not.

Some players ignore hit, when hit rating is the most valuable stat for most DPS classes. This is because for the same amount of item points, hit rating usually gives a higher increase in overall damage output than other stats. Therefore, it is advisable for most DPS to stack hit rating until hit-capped.

It is also common to see people over-value the benefit of hit rating. Some players stack hit rating indiscriminately without realizing that their hit is over-capped by a large amount. Any hit rating above the hit cap is useless. One should adjust the hit rating so that they are not over the cap by too much.

Another common misconception is that some people over value hit rating, to such an extent that they choose gear of a lower quality with hit rating over other gear that has a higher quality but no hit rating. They forget why one wants hit rating: to maximize the damage output. For example, imagine there are two helms with similar stats except that one has 20 more hit rating, while the other has 40 more critical strike rating (or other stats for classes that value crit less). Although 1 hit rating is better than 1 critical strike rating usually, 40 critical strike rating can be better than 20 hit rating. Therefore, one should still choose the second helm even this means he/she will be further away from being hit-capped. In general, we should choose the piece of gear that provides higher improvement in damage output, regardless of whether it has hit rating or not.

Another point some raiders do not consider is that many fights in ICC are 'adds' fights. The spell hit rating requirement for a level 83 raid boss is 17%. For a level 82 add, it is 6%. Assuming the Gunship adds, Saurfang blood beasts, and Dreamwalker adds are level 82s, it can be said that many casters are over hit for those fights. Each raider should decide if killing the adds is more important than dpsing a raid boss, and what amount of hit rating gives the raid the most benefit. Gear can be swapped on a boss by boss basis. One set can have 17% hit, and the other set can drop hit for something contributing to higher dps. Maghia's Misguided Quill can be used for bosses but swapped out for 'adds' fights.