"They aren't so good at thinking about things, but they make great shock troops. And we don't have to feel bad about sending them into battle on the front lines, because they have a life expectancy of only three years anyway."
- Alchemist Zovzik

Hobgoblins are large purple-skinned giants that guard the Isle of Kezan's cities, such as the Undermine. Hobgoblins came into existence during the Second War when alchemists did experimentation on their own race. The hobgoblin was the product. Hobgoblins are "bigger, stronger, and much stupider" than goblins.

The alchemically-wrought changes in hobgoblins did more than increase their size and strength and decrease their mental faculties. Perhaps the most well-known fact about them is their short lives. If a hobgoblin lives to his third year, they are ancient. Hobgoblins either don’t realize their lives are pitifully short (which is likely, due to their limited intellect) or they don't care.

Hobgoblins can also alter their personal metabolisms, channeling their adrenalin into the muscles that most need it. Their sweat is acidic, and they are capable of bursts of amazing speed that will reduce them to unconscious piles.

One frightening change the alchemy wrought was on hobgoblin emotions and psychology. Hobgoblins are unstable, and their goblin masters find them difficult to control. They have a number of tactics — ranging from the violent to the culinary — to convince hobgoblins to obey, but because of this instability goblins use hobgoblins only rarely. Hobgoblins grunt out phrases in Common and Goblin.[1]

Concept art listed as being hobgoblins can be found in Art of World of Warcraft. Other artwork in Art of Warcraft also seem to describe "before" and "after" pictures of goblins turning into hobgoblins. 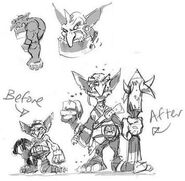 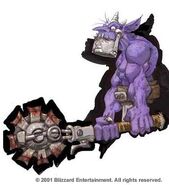 Concept art by Sons of the Storm artist Thammer. Likely a picture of a hobgoblin.

Playable goblins have a racial ability that summons a "Pack Hobgoblin" that allows them to access the bank anywhere.

The Hobgoblins appear in other Goblin zones as quest givers.