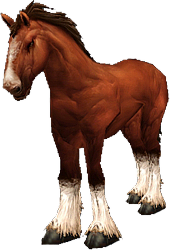 A horse is a large four-legged, four-hoofed animal with a long face, substantial body, and fast, narrow legs. This is the primary mount for humans, and is also known to be used by the Pandaren.[1]

The strong bond between the humans of Azeroth and their warhorses has existed for generations. However, since the fall of Lordaeron, only select varieties continue to be bred throughout Alliance-controlled lands. Most prized among these are the stately Evendales of Elwynn Forest, renowned for their loyalty and even tempers. These horses command a hefty sum, but they reward their owners with steadiness and speed.[2] Horses are widely domesticated for riding and as beasts of burden. A horse not trained for war does not normally use its hooves to attack.[3] (MGWS 11) 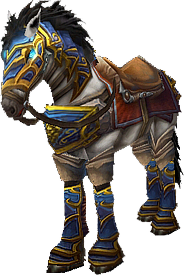 Three types of epic mount horses are purchasable in Eastvale Logging Camp, Southshore, and Theramore for 10

. The PvP epic horse is the Black War Steed.

This is a list of vendors at which places are offering which horses. Note that the vendor in Theramore isn't marked "Stormwind" and therefore doesn't give you a discount for reputation with Stormwind.

Note: The corral at Menethil includes a white stallion and a palomino, but unfortunately they are not purchasable.

These are smaller breeds of working horses. These animals are usually ready for useful work by age two. A light horse cannot fight while carrying a rider. A light load for a light horse is up to 150 pounds; a medium load, 151–300 pounds; and a heavy load, 301–450 pounds. A light horse can drag 2,250 pounds.[3] (MGWS 11)

These animals are similar to light horses, but are trained and bred for strength and aggression. They usually are not ready for warfare before age three. A light warhorse can fight while carrying a rider, but the rider cannot also attack unless he is good at riding. A light load for a light warhorse is up to 230 pounds; a medium load, 231–460 pounds; and a heavy load, 461–690 pounds. A light warhorse can drag 3,450 pounds.[3] (MGWS 11)

Muscles ripple beneath this animal’s white coat. It snorts and paws the ground. Heavy warhorses are trained and bred for strength and aggression. Human knights ride such beasts into battle. A heavy warhorse can fight while carrying a rider. In battle, a heavy warhorse lashes out with its hooves and, if one gets lucky, it bites off the enemy’s face.[4] (APG 215)

A pony is a small type of horse, under 5 feet tall at the shoulder. They are similar to light horses and cannot fight while carrying a rider. A pony not trained for war does not normally use its hooves to attack but rather to run. A light load for a pony is up to 75 pounds; a medium load, 76–150 pounds; and a heavy load, 151–225 pounds. A pony can drag 1,125 pounds. They are solitary and are usually found on temperate planes.[3] (MGWS 15-16)

A pony that is trained for war. It can use its hooves to attack. This animal's statistics would fall between a Light Horse and a Light Warhorse.[5] (WoWRPG 201)

The first steam horses were built by the Alliance for patrols traveling the arid savannah of the Barrens in eastern Kalimdor, where grazing was sparse. The rider sits in the saddle atop the four-legged machine and guides it just as they would a living mount. It moves at 60 miles per hour and has a crew of 1.[6] (M&M 191)