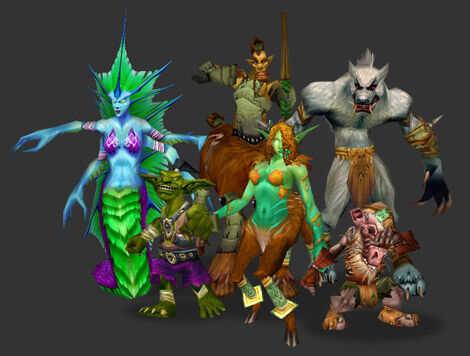 A humanoid usually has two arms, two legs, and one head, or a human-like torso, arms, and a head. Humanoids have few or no supernatural or extraordinary abilities, but most can speak and usually have well-developed societies. They are usually small to medium in size.[1] Some humanoids are monstrous humanoids. Monstrous humanoids are similar to humanoids, but with monstrous or animal-like features. They often have magical abilities as well.[2]

In World of Warcraft, a humanoid is a type of creature or mob in the game which is distinguished from beasts, undead and other in-game mob types. Humanoids include most socially apt creatures that show some form of self-awareness and intelligence. It should be noted that humanoids encompass both humans and beings that are roughly similar to humans. This does not mean that all humanoids are related to humans.

The playable undead race (Forsaken) count as humanoids in World of Warcraft in PvP combat, which allows them to be subject to spells and effects that they otherwise would not be subject to as an undead. This also prevents them from being affected by items that give +attack power to undead and prevents them from being subject to abilities like Stratholme Holy Water. This is for gameplay purposes, and only in World of Warcraft, according to published lore in other sources they are affected the same way as any other undead.