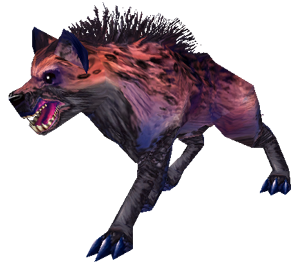 Hyenas are large carnivorous beasts found in the most barren areas of Kalimdor. Hyenas are pack hunters infamous for their cunning and their unnerving vocalizations. A favorite tactic is to send a few individuals against the foe’s front while the rest of the pack circles and attacks from the flanks or rear.[1] (MGWS 11)

They are most dangerous when traveling in packs. Hyenas often have an ability to inflict dangerous diseases on those who fight them. Centaur hunters in the Barrens and Desolace often keep them as pets, while some members of the Scarlet Crusade use red hyenas as attack animals. Hyenas are skinnable. They are found in the Barrens, Desolace, Tanaris, Blasted Lands, Scarlet Monastery, Western Plaguelands, and Thousand Needles.

Though hunters can respec their pet hyenas into Cunning or Tenacity, they are inherently Ferocity. In addition to the abilities that come standard with all pets ([Growl] and [Avoidance]) and those given to their natural or retrained specialization, all hyenas are given the following: