Not to be confused with Frost giant.

Ice giants[1][2] (also referred as frost giants[3][4][5][6][7][8]) primarily belong to the faction in known as the Sons of Hodir. After his betrayal of the Pantheon, Thorim's brother, Loken, tricked him into betraying his ice giant allies by murdering his wife, Sif, and blaming it on the ice giant king. Thorim was enraged, striking out at his allies and then settling into a long stupor.

Many years later, Thorim discovered the truth. With the aid of players serving the Sons of Hodir, Thorim recovered his weapon (Krolmir, Hammer of Storms) and his shattered armor, then brought war to his treacherous brother. However, it proved to be an elaborate ruse perpetrated by Loken to lure Thorim away from the Temple of Storms, where proximity to his dark master granted him the power to overcome Thorim's attack. Thorim and his proto-drake, Veranus, were captured and taken to "new dwellings". Both became bosses in Ulduar. 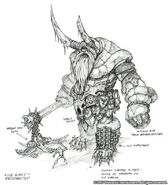 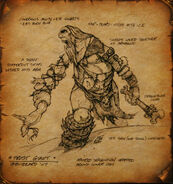