Imps (also known as fel sprites)[citation needed] are small, cackling demons - evil immortals who feed upon life and magic. They delight in inflicting suffering, spreading corruption, and, of course, destroying all that is good. Most demons were once mortal. Not all demons are sentient: various animals have been transformed into demons, for instance.[2]

In order to become a demon, a creature must be infused with fel energy. As the existence of non-sentient demons suggests, a creature's wishes are irrelevant to the process. Willing or not, a creature can be changed into a demon. Such a transformation alters the affected creature on a fundamental level and typically leaves little or nothing of that creature's original personality.[2]

Unstable energies coalesced into an astral dimension known as the Twisting Nether and the creatures that emerged from this realm were known as demons. Demons came in many forms, their appearance constantly twisting by the Twisting Nether itself. One such form demons come in is the imp mother. It is said that imp mothers, through a mini-portal in their stomach, barf imps into creation.[3]

The Grell of Azeroth 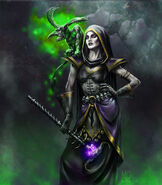 Acolyte Demia: "Whenever a warlock starts talking about sharing the wealth, I opt to be a pauper." - Timmo Shadestep

Imp Mistress Noali: "I command you, my minions! Wash over the enemy like a sea of fire and burn them from this plane!"

Sampron the Banisher: "Mysterious disappearances? I wouldn't know anything about that."

In the face of demonic power, most heroes see death. Warlocks see only opportunity. Dominance is their aim, and they have found a path to it in the dark arts. These voracious spellcasters summon demonic minions to fight beside them. At first, they command only the service of imps.[4]

An imp is an imp yet not all imps are the same. It is important to note though that one imp described as, let's state, a fel sprite is extremely similar to a hellish imp in the sense that they are both fel sprites and hellish.

Warlock magics are demonic powers of entropy and destruction, a process that would involve demons as imps because warlock magics are demonic. Imps are constructs if they can be destroyed (death is for the living while destruction is for constructs) because destruction is the process of destroying structures, breaking them down into the parts that they're constructed of. If imps are constructs, which are not living things, perhaps the study and use of magic to raise and control these beings is necromancy - the study and use of magic to raise and/or control the dead. Imps, as a side note, resemble homonculi, demons[7] that can be constructed.

Are demons such as imps Fel Fire's source?

Gobloz: "Fine, fine! Don't say I never did anything for you!" 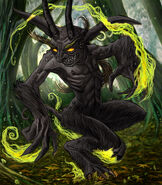 Piztog: "What? You mean you can't kill this one by yourself?"

Fel flame is flame born from demonic magic - the magic of demons such as imps. Despite that fact, Blizzard's Historian Sean Copeland stated that demons aren't the source of fel magic, stating that the nature of this magic is created from destroying something else.[8] If Sean was telling the truth when he claimed that demons aren't the source of fel magic but contain fel magic, imps were infused with fel magic - a process that would make their skin crack until they explode into smithereens. After he was asked how demons can be alive since fel magic is destructive, Sean Copeland stated that it's magic. Unfortunately, he deleted his twitter account before someone could take a picture of this seemingly foolish claim.

Grell are forest spirits that resemble imps and are therefore demonic - of, from, or resembling, demons. It could be possible that the grell infused with the evil, fel powers of the fel moss became demons.