In Loving Memory is the name of a monument located within the Hillsbrad Foothills, located near Dun Garok. In the south-east corner of the zone

, on a ridge overlooking the sea, is a large gravestone with a dwarf named Rousch standing in front of it. Reading the engraved plate on the front reveals this inscription:

Despite the similarity in name to "Tony Stark," this is evidently not an Easter egg paying tribute to the comic book hero, but is instead an in-game memorial to the friend of a WoW developer.

From the Allakhazam page on Rousch is this explanation:

Tony never worked for Blizzard (in fact, he was a mortgage broker), and he didn't die in a car accident.

I met Tony Stark (that was indeed his real name, the fact that it's Iron Man's secret identity is a coincidence) several months before he died. We both hung out at the same cigar store. While we didn't get to know each other well enough to be friends, I liked him and saw him several times a week. We got together at the cigar store on Tuesday nights to play WOW with a group of people and smoke cigars. Some of those people worked for Blizzard, and were friends of Tony's.

Rousch was Tony's main, and when Tony died he was somewhere in the mid 40's. Since that was Tony's first ever character, he was hardly one of the first to try a dwarf.

Tony died while doing something he loved, which was scuba diving. It was later determined that something went wrong with his heart. (The truth in this case is more dramatic than the made up stories. As we all know, that happens sometimes.)

I was touched to see that some of Tony's friends at Blizzard went to the trouble of arranging the memorial in the game to him. It was added in a patch a few months after his death. He was a kind, cheerful guy, who was always ready to help out someone in need. We all miss him. 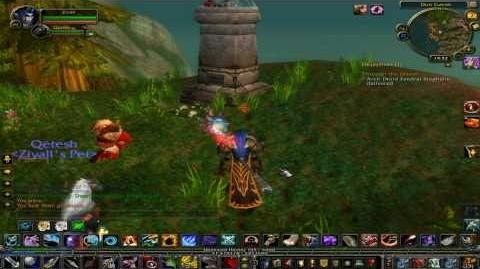