Infernals are mindless giants of flame and fury, summoned by the warlocks' Inferno spell. Falling to earth as green, molten meteorites, infernals exist only to destroy every living thing in their path. Though their lifespans are limited, the mighty infernals have been known to destroy entire cities before their energies dissipated back into the Great Dark Beyond.[3]

A Mockery of the Titans

A large concentration of infernals can be found in Shadowmoon Valley. There are the ever present infernals attacking Alliance and Horde towns in the region; they appear to be stockpiled at Legion Hold and launched by shivarra. The Deathforge provides details on how this variety is made.

Dreadlords are incredibly powerful demons who wield the powers of darkness and mental domination. The dreadlord marks the pinnacle of his dark powers with the ability to summon a fiery infernal. At his call, the infernal will streak down from the sky. The infernal, engulfed in searing flame, will then rise to do the dreadlord's bidding.[3]

Warlocks were mages that delved too deeply into the roots of demonic power and can summon many demonic soldiers to destroy their enemies. The powerful Infernal is just one of these demonic soldiers.[4]

Are Infernals Constructs, Demons, or Both?

Do Warlock Magics come From Infernals?

Warlock magics are demonic[5] powers of entropy and destruction, which is a process - not a living thing. Warlock magics do not come from the living and warlock energy spreads like radiation, which means that warlock energy can seep into - and exist inside - structures. Structures infused with the demonic warlock magics seem to have a connection to demons such as infernals and, by extension, the Twisting Nether. And, presumably, warlocks can access the demonic power of infernals and pull infernals from the Twisting Nether by destroying those structures. Despite that fact, when asked if perhaps warlocks are harnessing their power from the Twisting Nether, the Blizzard Historian known as Sean Copeland stated, “No, that’d be magi, IIRC. They gain power by the destruction of another source (recall the undead warlock in original cinematic)."[6] Additionally, he claims that demons contain fel magic but aren't the source, stating that the nature of this magic is created by destroying something else.[7] It seems that Sean Copeland doesn't understand that fel magic is demonic and destructive. If anything, demons are constructs in a state where their own structures are being destroyed by their own energies, energies that are released from demons during that process. After he was asked how demons can be alive since fel magic is destructive, Sean Copeland stated, "it's magic ;)". As such, Sean Copeland is joking and should not be taken seriously.

Most - if not all - infernals have an immolation aura that burns everything it touches with fel fire.

Kroshius must be defeated to obtain his Infernal Core, required by a warlock to receive the Inferno spell.

The creature is of tremendous size, its roughly humanoid and brutish form engulfed in sulfurous flames.

Infernals are hulking brutes engulfed in arcane fire, entropic manifestations that warlocks conjure forth from the Nether. Infernals burst through the planar veil to strike like entropic meteorites, devastating everything in their impact radius. The infernals then rise to smash any and all targets in the area. Ripped from the void and cut off from the sustaining energies of the Twisting Nether, infernals endure for hours, perhaps days at most. Still, they can wreak tremendous havoc in that time, acting as engines of pure destruction.[8]

Infernals raining down as meteors. 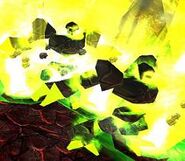 Infernal art from the WoW TCG. 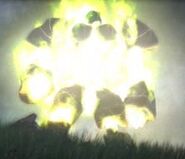 An infernal in a cinematic of Warcraft III: Reign of Chaos. 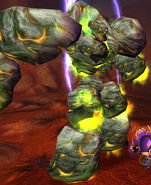 An infernal seen in Outland.