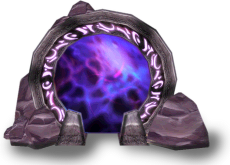 An instance portal is the sparkling field that marks the entrance to an instance.

The color of the portal indicates the type of instance: