"Pay attention. This is Instructor Razuvious, Kel'Thuzad's appointed trainer of all death knights. It is said that his own technique is so potent, only a disciple of his could possibly withstand his might."
—Commander Eligor Dawnbringer

Instructor Razuvious is the first boss in the Military Quarter of Naxxramas. The most feared of the death knight trainers of the Scourge, Razuvious is accompanied by two (normal) or four (heroic) Death Knight Understudies, who are used by the raiding party to defeat him.

Instructor Razuvious hits hard; too hard for any tank that isn't substantially over-geared for the fight. His understudies have a Bone Barrier self-buff capable of absorbing most of the damage. In the 10-man version these understudies can be mind-controlled through the Orbs of Domination by the stairs; a 25-man raid will have to bring enough priests to mind-control them directly.

Instructor Razuvious has approximately 10,100,000 hit points. His regular melee hits plate for about 30,000.

Note: Compared to the original 40-man version, there is no longer a Mind Exhaustion debuff on the Understudies after you stop MCing them. This means a priest can mind control the same Understudy over and over. However the standard diminishing returns on repeated MC still exists.

Instructor Razuvious has approximately 3,349,000 hit points. His regular melee hits plate for about 30,000.

Before the fight begins, you must assign Mind Control Priests to specific Understudies. Two Priests are required for this fight, but three is safer, and four is if you do not want to bother tanking the extra fourth add. See Useful macros for priests for a convenient Mind Control macro.

When the pull begins, the Tank should walk about 3/4s of the way down the steps until the Understudies pull. The Tank will not do any actions, just serve as a Damage Soaker for the first three seconds of the fight. The Tank may use an AoE Aggro, as long as it does not hit the Instructor. Razuvious will watch for three to five seconds, then he will join the fight, attacking the person with the highest aggro. It is the Main Priest's job to Mind Control one of the adds and Bone Barrier (6) + Taunt (5) the Instructor before he gets to the tank. Priests generally can stand at the base of the stairs and tank the Instructor at the closest part of the Green Circle. This should give everyone enough space to work with (Mind Control distance break), and allow enough time for the Priests to Re-Mind Control before they get back to them.

An alternative way of pulling is to have two paladins shield the two priests who go in first. This way they both have more than enough time to cast Mind Control and one of them to taunt the Instructor.

After the initial pull from the Understudies, the two Mind Controlling Priests will alternate the use of their 'Pets' to Bone Barrier and then Taunt. It is extremely important to Bone Barrier THEN Taunt as the Instructor will cause massive damage to the add which tax the Healers ability to keep the add up. The switch will need to happen every 10 seconds (9 seconds to be safe) since Taunt/Bone Barrier Cooldown is about 18 seconds, but the effect is 10 seconds. Note that if Taunt falls off, or Mind Control falls while an Understudy is tanking, it is extremely easy for any player to pull aggro, and the Instructor will begin killing players.

If you are utilizing less than four Priests to Mind Control, the rest of the adds will need to be off tanked. They do not hit particularly hard. They may be needed if one of the Understudies die while tanking Instructor.

As for the DPS, once a MC Priest's add has control of the Instructor, all DPS may unload on the Instructor. Each Taunt lasts 10 seconds, and, as long as the Tanking Priest is spamming 'Blood Strike', and has 'Taunt' running it is impossible to pull Aggro from an Understudy, due to how the Understudies Effects work.

Healers will need to focus on Healing the Tanking Understudies. The most mana-efficient heals should be used (such as a Priest's Greater Heal) for Understudies, since Understudies take massive amounts of damage. The raid should generally be kept at least at 90%, as Instructor will throw a knife randomly at a raid member which will generally bring them down to at least half health (Cloth wearers could be killed outright). To make sure that the raid stays up, one healer should be dedicated to healing players that get the Jagged Knife Debuff, healing the adds Tank otherwise.

Another strategy that has been brought to the raiding community is from the Dungeons and Raids forums on the main World of Warcraft Website. The title of the post is Razuvious Who Needs Priests? A guild on Azshara(US) <Dungeon Team Extreme> came up with the strategy of using 3 hunters in a triangle and doing a distracting shot rotation to make up for the lack of priests. This strategy can be viewed in the video on the forum post or at the bottom of this page in the video section. It is an alternate strategy there for guilds who seem to have a shortage of priests for their raids. As well as a strategy of using 1 priest and have a hunter taunt then feign between mind controls: this article

Death Knight Understudies and 2 controlling orbs in the 10-man version. The 2 orbs should be controlled by the tanks and the encounter is started by each tank selecting their own understudy, walking up to their orb and right-clicking it to control them. Razuvious will immediately aggro onto them and whichever tank is decided to tank first must immediately hit "6" on your new hotkey bar (pet bar) for Bone Barrier, then "5" to taunt. While tanking use the "4" key repeatedly to Blood Strike for holding aggro. Keep Razuvious tanked near the back of the circle where the understudies are located before the encounter starts, this way when you refresh your orb spell you will have plenty of time to re-control your understudy before he can run all the way to you. Bone Barrier lasts 20 secs so the 2nd tanking understudy must hit their Bone Barrier and taunt before the first tank's Bone Barrier runs out. There is a 30 second cooldown on the Bone Barrier. To help your healers and ensure the understudies always have Bone Barrier up, taunt closer to every 16 seconds, rather than 20. The tanks can see the Bone Barrier icon's 30 second cooldown timer on the pet bar. Once it goes past halfway, the tank should call out for a taunt. Calling out is helpful because when a tank has to dismiss and re-control an understudy, he can lose track of the timer. ALWAYS use the Bone Barrier ability BEFORE you taunt. This is all the fight is, the tanks trading taunts to ensure the tanking understudy has Bone Barrier up 100% of the time. Healers will need to help heal the understudies even with their Bone Barrier up to ensure both stay alive through the entire encounter.

When clicking an orb to control an understudy you will see that your character is channeling the spell and the channel lasts for 1 minute. To make sure the channel does not break while tanking Razuvious, each tank should refresh the channeling spell every 2 taunt cycles. In order to do this after you've been taunted off of the second time IMMEDIATELY right-click the understudy's pet frame and select "dismiss". NOTE: you cannot use the "leave vehicle" button that shows up in the "=" of your hotbar, it does nothing, you must dismiss manually. Another option is to use a class ability that interrupts the channeling of mind control. A warrior can do this by using a shout, for example. This may be faster and easier than using the "dismiss" option. As soon as you have dismissed the understudy click the orb again to control him, this refreshes your channeling spell and will leave you with enough time for the 5 second cooldown on your abilities to be off before the current tank's Bone Barrier falls off.

Tips: Tank the boss in the far center of the green floor. Whenever you need to dismiss and re-control the add, move the add to the right/left, far-end of the room. This way, the add will come straight to you and because all melee players are in the center, you have clear sight of him to target. Even better, you can start the fight by using /focus on your add, and click on his portrait to target it whenever you need to take control of it again. Dismiss, click on portrait, wait 2–3 seconds for the "uncontrollable" buff to wear off, and right-click on the orb without moving to re-control him again.

This technique is sometime hard to explain to people, however there are a few things the main tank can do to aid the off tank. If your off tank has not taunted the mob off, you are able to tank a few hits, and with 3 healers in the group, you can heal through the damage if they focus (i.e. 2 priests and druid, spam healed for the entire fight and survived the 10-man version).

Razuvious also appears at Acherus: The Ebon Hold, where he oversees the training of new death knights. He is involved in the following quests:

The following four macros are helpful for if you are Mind Controlling the Understudies.

Bone Barrier and Change Target: Once you have an Understudy under your control, you can use this macro to change your target to Instructor and Cast Bone Barrier (once you are close to Instructor and ready to taunt). Due to the limitations of Global Cooldown and Targeting, it must be different from your Taunting Macro.

Taunt and Notify: This allows you to notify everyone around you that you are taking Instructor. Make sure Bone Barrier is already up. If you are utilizing the four macros here, you will hit this immediately after the last macro (Bone Barrier).

Release Understudy: The following macro allows you to dismiss your understudy allowing you to use the 'Control Understudy' Macro right after.

With these four Macros, you can effectively make this a four-button fight (with the exception of hitting the Attack Buttons). 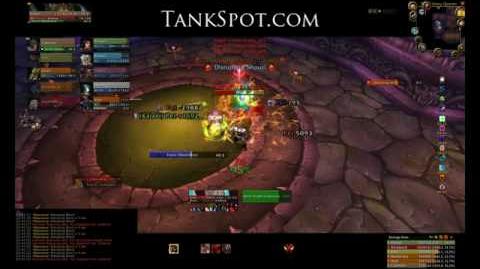 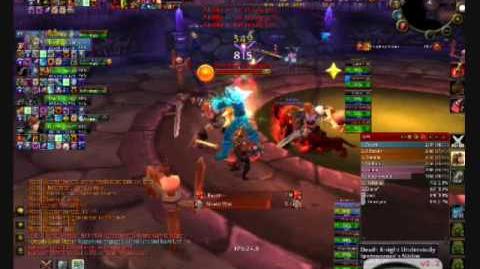 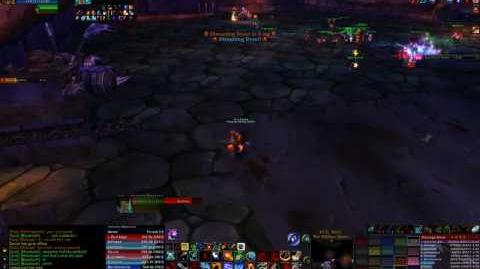