Edit this page
The act of jubilant self-expression through dancing has long been an integral part of World of Warcraft's social interactions. Now it's been taken to a whole new level with the new Dance Battle system, coming to the game in an upcoming content patch. Combining elements of Arena competition with the dynamism and creativity of coordinated, player-controlled dance animations, Dance Battles offer a whole new kind of crew-versus-crew challenge.

So You Think You Can /Dance? 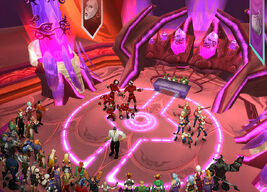 From the interdimensional fortress known as Tempest Keep, Kael'thas Sunstrider has issued a challenge far and wide to dance crews throughout Kalimdor, the Eastern Kingdoms, and Northrend -- in order to find out who is Azeroth's best dance crew!

He's handpicked his judges from nearby Area 52 in Outland and retrofitted his flying fortress for its new purpose -- to host a series of exhilarating dance-offs. He's also relocated his fiery, faithful companion A'lar and retooled the phoenix's chamber to accommodate the competition. It's here that your crew will find the NPC dancemasters, who will allow you to initiate a dance-off or accept another crew's challenge.

You perform dance moves using a custom interface similar to those that appear when controlling a vehicle in Wrath of the Lich King. The custom action bar displays all available dance moves, which each crew member can individually configure by speaking to the appropriate NPC before the competition.

Next, your crew will need to create their routine. To practice, simply select a backing track, and the music will begin after a brief countdown. The best routines are carefully planned out in advance and executed with individual skill as well as with an overall group dynamic in mind.

Once engaged in a Dance Battle, simply select the dance move you wish to perform, and your character will execute it. As with the Arena system, close communication and teamwork is crucial -- you'll have to be in sync, both with the music as well as with the other members of your crew, to become the "server" and not the "servee."

Each crew will take turns performing, with the order randomly selected at the beginning of each dance-off. Whichever crew posts the higher score from the judges is declared the winner of the battle. At the end of the Dance Battle season, only one team will be dubbed Azeroth's best dance crew!