Ion Hazzikostas is the Game Director[1] (previously Assistant Game Director[citation needed] and Lead Game Designer[2][3] and Lead Encounter Designer before that) for World of Warcraft.

As lead encounter designer on the World of Warcraft® team, Ion Hazzikostas’s primary responsibility is overseeing the creation of the game’s dungeon and raid content.

Hazzikostas joined Blizzard Entertainment in the summer of 2008 as a game designer, and his responsibilities have included raid boss design and implementation, class design and balancing, and maintaining the World of Warcraft achievement system. Prior to arriving at Blizzard, he worked as an attorney at a law firm in Washington, DC.

In his spare time, Hazzikostas enjoys exploring Southern California in search of craft beer. Having grown up in New York City, he is a lifelong Yankees fan. 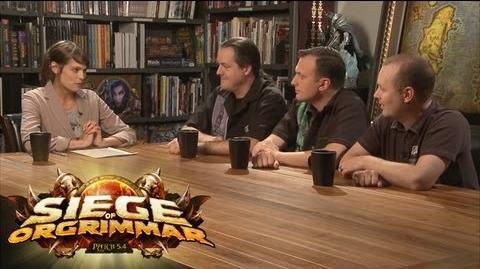 Polygon.com Introducing Tanaan Jungle: six things to know about World of Warcraft's newest zone By Philip Kollar on May 22, 2015 at 3:00p

WoW.Allakhazam.com Like a Boss! An Interview With Ion Hazzikostas by Qelric Sep 13th, 2013 at 6:45 PM