Edit this page
watch 06:08
'World of Warcraft' Lore: Island Expeditions
Do you like this video?
Play Sound

Island expeditions are 3-player scenarios introduced in Battle for Azeroth. Both factions sail across the Great Sea to harvest and steal Azerite from the islands.[1] The maps for the expeditions will be provided by the gnomes and goblins, who have developed a new technology to find which islands may contain azerite. Ships to the islands will depart from faction hubs.[2]

There are currently seven Expedition islands with two more coming in 8.1.0 Tides of Vengeance[4] and another two confirmed for 8.2.0 Rise of Azshara[5]. Only 3 of the islands will be available each week. Check the Expedition Map when queuing to see which islands are currently available. As a group enters the island, the map is generated with small random differences each time including where each faction begins their exploration and the key areas they are required to scout.

Creatures on the island vary to some degree. There are some creature types that can be found on most, if not all islands, but as each island has it's own theme, there are island specific creatures as well. If an Invasion Event occurs on the island, boss and/or similar minions may appear that are only for that event and do not follow a specific island's theme. The difficulty of Elite creatures will depend on the difficulty of the Expedition.

Set sail for the previously unmapped isles of Azeroth. Battle in groups of three as you race against cunning rival intruders—or enemy players—to collect the island’s resources. Constantly evolving challenges await as you traverse frozen landscapes near Northrend, open the gates of an abandoned Gilnean castle, navigate a war between elementals and more.[6] 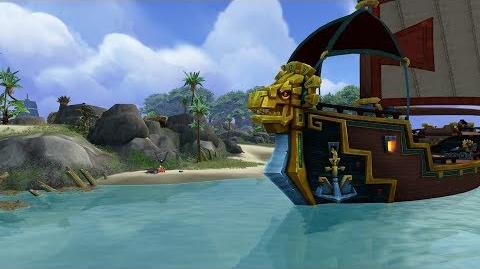 BlizzardWatch The best way to farm Island Expeditions for mounts, pets, and toys is probably not the way we’ve all been doing them By Tyler Colp Sep 27, 2018 10:00 am CT
Community content is available under CC-BY-SA unless otherwise noted.
Advertisement