WoWWiki
Register
Don't have an account?
Sign In
Advertisement
in: Articles with non-standard external links, Islands, Isle of Giants

Off the Northern coast of Kun-Lai Summit

The Isle of Giants is an island located off the Northern coast of Kun-Lai Summit in Pandaria. The island is home to a variety of large dinosaurs, and one of the Pandaria world bosses: Oondasta. There are also a force of Zandalar trolls on the island, presumably capturing and/or taming dinosaurs for their own use.

Like the Isle of Thunder and the Timeless Isle, a clinging mist engulfs this island, preventing players from using any flying mount.

Players are able to loot Giant Dinosaur Bones from any of the island's inhabitants. 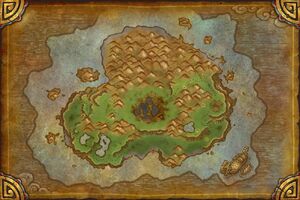