Jarod Shadowsong (also known as "Commander Jarod Shadowsong") is the younger brother of Maiev Shadowsong, and was commander of the Kaldorei Resistance during the War of the Ancients. He becomes a hero and leader to the night elves following the war's conclusion, and is instrumental in easing tensions between his people and the Highborne. Strangely, he is rarely mentioned in the novels and only appears in Mount Hyjal in-game. His sudden disappearance was explained in the novel Wolfheart in which Jarod suddenly returns to Darnassus with his dying mate after ten millennia of life in the wild.

Jarod was a minor guard in the city Suramar and was unofficially promoted by Kur'talos Ravencrest to the rank of Captain when he returned, accompanied by Malfurion Stormrage, Tyrande Whisperwind, Krasus, Rhonin, and Broxigar. Jarod was put in charge of guarding these personages and became a valuable supporter of Lord Ravencrest. After the death of Lord Ravencrest and later Desdel Stareye (due to his own arrogance and shrugging off the warnings of Jarod), many nobles and soldiers alike came to him for answers concerning the battlefield as he was the first man of authority they came across on the wrecked battlefield. After successfully winning the battle he was then (not to his liking) made commander to the host.[1] (Sund 118)

This section concerns content that is potentially inaccurate. Reason: What is this info based on?

When Desdel Stareye took command after Ravencrest's death, Jarod was named liaison to the tauren,earthen, and furbolg, largely because Stareye thought Jarod was used to sacrifice. When Stareye was killed (much to the relief of Krasus and Rhonin) — and soon after Lord Del'theon was killed — Jarod unconsciously assumed field command of the troops. As a result, the tide of the battle was turned from the death of the resistance into a small victory within hours. Rhonin, the earthen and the tauren insisted that Jarod assume complete command of the allied forces, to which he reluctantly agreed. Most of the nobles and Moon Guard agreed he should lead them. Jarod's unorthodox tactics were extremely effective in holding the line against the Burning Legion (about 25 miles out to sea from Kalimdor's current coast) with minimal loss of life, until Archimonde arrived on the battlefield. These battles even liberated the night elves from Stareye's mistakes and improved relations with other races, and even served to deteriorate the caste system of the night elves (which placed only nobles as leaders).

Jarod's mere presence also seems to serve in raising morale. It is noted that, unlike the commanders before him, all fight harder and obey him with greater swiftness. An amused Rhonin, however, realizes that Jarod probably doesn't consider himself impressive at all, and believes he is only doing what he must. Unfortunately for his modesty, his people's reverence for him only grew when the demigods joined the conflict, and willingly placed themselves under his command. He even manages to earn the admiration and respect of his sister, who had never seemed to approve of him. Towards the end of the conflict, Jarod entered single combat with Archimonde himself. He knew that he would not be able to defeat the demon lord, but he fought anyway... until the portal in the Well of Eternity collapsed, and all of the Burning Legion — including Archimonde — were banished from the world of Azeroth. Although he believed his people would consider his resistance pathetic, as he fought so poorly against the demon commander, he was lauded as a hero. In spite of all but impossible odds, he had stood defiant against a commander of Burning Legion.

After the War of the Ancients

Following the conclusion of the War (mentioned in the end of War of the Ancients: The Sundering), Jarod was named one of the major leaders of the night elf civilization (the others being Tyrande Whisperwind, Malfurion Stormrage and Dath'Remar Sunstrider). Unfortunately for him, he is the first to discover that Illidan Stormrage was attempting to create a new Well of Eternity. He attempts to stop him, but is badly beaten by the other's vast command of the arcane. When they discover him, Maiev and Shandris quickly go to tend to him. A furious Maiev then attempts to kill Illidan for harming her brother, but is stopped by Tyrande and Malfurion. Jarod later agrees to Illidan's imprisonment. He is present during the birth of Nordrassil, and the Aspects' blessing of it. He also helps guide his people in finding a new place, and new ways, to live.[1] (Sund ?)

Jarod was known to have at least partly returned the affection of Shandris Feathermoon despite how when he first met her during the War of the Ancients, he described their age gap as being "A gulf the size of the Well of Eternity," although the difference was only a few years. As such, he is initially disturbed by the affectionate smiles the younger night elf always gave him. At the end of the book, however, he admits that he began to find comfort in them, especially with the pressures of leadership.[1] (Sund ?)

Over the years, he chooses to increasingly lessen his presence in night elf society, still believing that he is no hero, and not wanting to be remembered as one. He eventually fades away altogether. In his place, Tyrande begins to become the monarch of their people. One day, he suddenly vanished, along with a few personal possessions. He did not say where he was going, and he did not bid anyone farewell. Since that time, there were no sightings of him until much later.[1] (Sund ?)

In Wolfheart, Jarod Shadowsong returns to Darnassus with his dying wife, Shalasyr. Despite ten millennia of his absence he is recognized by sight by most sentinel guards and night elves. During his ascent to the Temple of the Moon he is met by Malfurion Stormrage, who (like everyone else) considered the former commander long dead.

Despite their haste, even the powers of Elune wielded by Tyrande Whisperwind are insufficient to heal Jarod's mate.

After the funeral, Jarod finds himself in the position of investigating several murders of a few Highborne of Eldre'Thalas in conjunction with his sister and several Worgen.  Eventually he gets charged to create new Watchers in order to guard night elven society.

Commander Jarod Shadowsong makes his World of Warcraft debut in

Cataclysm. He appears at Mount Hyjal and the Molten Front, aiding Malfurion Stormrage in the defense of the mountain. In Patch 4.2, he appears at the Sanctuary of Malorne.

When Gul'dan and Cordana Felsong stole Illidan's corpse from Vault of the Wardens. Maiev pursued them, and eventually went missing. Many wardens loyal to her began a search for her on the Broken Isles, Jarod also wanted to help them and find his sister.

During the search, Jarod went to Black Rook Hold, only to find that Kur'talos Ravencrest's body is missing and that he is raised with other undead in the fortress. Later Jarod finds Maiev alive and freed from Gul'dan, and together they defeated the ghost of Desdel Stareye.

Rhonin: "You won't get much argument from me."

Jarod Shadowsong at the Sanctuary of Malorne. 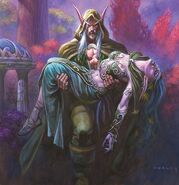 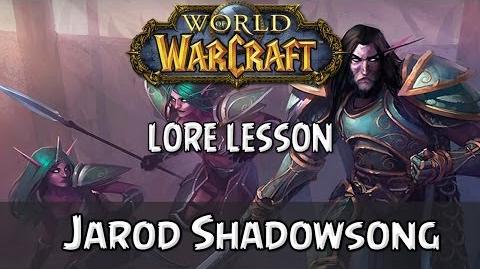