The Jinyu are a race of fish-like humanoids native to Pandaria. They are considered wise creatures even among the pandaren, as they have the ability to converse with the land. The jinyu were once murlocs that evolved when exposed to sacred pools in the Vale of Eternal Blossoms.

Alliance players who arrive at the Jade Forest will be trying to sway the jinyu into siding with the Alliance.[1] The rampaging hozen have caused much destruction to jinyu settlements and have been historical enemies.[2]

Before the Great Sundering

The Jinyu originated from Murlocs who were fortunate enough to live near the enchanted pools of the Vale of Eternal Blossoms. The magic of the pools expanded their minds and grew their bodies, until they became one of the great ancient cultures of Pandaria. In the days before the Sundering, legend has it that all rivers flowed to Pandaria. Few were more aware of this than the clever jinyu. Over time the wisest of their people learned to commune with the waters of the river and listen for the future and news it would bring. These elders were respected by most races and earned their title of "Waterspeakers".

After the Great Sundering

The Jinyu have been at war with the hozen for a long time. Many thousand years ago, the Pearlfin Tribe stood on the throne of all Pandaria. At one point they trusted a tribe of hozen which somehow led to a great betrayal; consequently causing a waning of their numbers and influence. After this betrayal, Pearlfin Village became all that was left of their people. The jinyu have been distrustful of outsiders (and at war with the Hozen) ever since.

After the Cataclysm, Alliance players encounter a Jinyu named Bold Karasshi and enlist his aid in rescuing Admiral Taylor from a hozen prison. After escaping their captors, the Alliance and jinyu prisoners seek sancturary in Pearlfin Village, home of the Pearlfin tribe. After discovering that the Horde has allied with the hozen, the Alliance attempts to recruit the Jinyu into the Alliance. After consulting with their water spirits and the spirit of the former Jinyu emperor of Pandaria, Rassharom, the Pearlfin Jinyu agree to ally themselves with the Alliance. The Alliance trains the Pearlfin in their superior military knowledge and arms them with weaponry. In exchange, the Pearlfin pledges their support in the Alliance's war against the Horde.

Unfortunately, during a battle between the Alliance forces under Admiral Taylor and the Horde forces (now bolstered by the Hozen) under General Nazgrim at the Statue of the Jade Serpent, things take a turn for the horrific, as the negative energies born of the pure hatred betwixt the two rival factions gives a mighty sha (which was imprisoned underneath the Jade Serpent) enough strength to break free of its prison (much to the horror of the local pandaren).

Jinyu society is caste-based. Jinyu are chosen for their roles (such as warriors or priests) at a young age, and final say in all communal decisions is granted to the elder Jinyu in a tribe. While this rigid structure can seem constricting, the elders' roles are often deserved: they can speak and listen to the waters that flow throughout Pandaria, making them extremely wise and terribly powerful.[3] 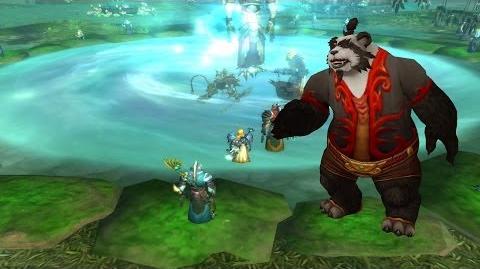