<Lord of the Blood Elves>

Kael'thas Sunstrider <Lord of the Blood Elves> is the final boss of the Magisters' Terrace in Patch 2.4.0. Note: As of patch 3.0.3, this instance is far simpler than it used to be.

At the start of the fight, Kael'thas will largely stick to melee, as well as throwing out the occasional Fireball. If you have no one in melee range, Kael will resort to casting spells instead. Fire Resistance isn't necessary, although a bit of it (from a Paladin Aura or a Fire Resistance Totem) will help. Kael's casts can also be interrupted so players with silencing abilities should be sure to interrupt his Fireball, and a single shaman can avoid almost all damage from fireballs by alternating grounding totem and earthshock. However, it is not possible to interrupt the Flamestrike, Phoenix, or Gravity spells. He also uses Flamestrike which is easily avoidable, but will kill you if you stand in for the initial hit. You should kill the bird and the egg before Kael'thas reaches 50%.

Ten seconds after combat begins, Kael will summon a phoenix, and will continuously summon new ones every minute for the duration of the first phase. When a phoenix is out it needs to be beaten down quickly (with ranged damage), by at least two party members. The phoenix should be kited away from the tank and Kael, as it will eventually explode when it dies, dealing tremendous damage and throwing nearby players backwards. Once it dies an egg will spawn in its place, which will very soon hatch and respawn the phoenix if it is not destroyed. A total of two phoenix spawns are almost unavoidable for most groups. Take Kael to 50% to start Phase 2 after the second phoenix egg is broken; having even one phoenix up during Phase 2 is an almost guaranteed wipe.

To minimize the damage Hellfire causes to players that the phoenix passes, you should plan out positioning and aggro.

Phase 2 begins when Kael'thas hits 50% health. After a few seconds, Kael'thas will cast Gravity Lapse, which will throw your entire party into the air and allow you to float freely around, much like the fight with him in Tempest Keep. He'll begin channeling Arcane Energy onto your entire group, which deals 300 damage every second for 30 seconds. He will also summon three Arcane Orbs, which will hit you in melee range for around 2k+. It is thus vital for your party to swim around and avoid the orbs. It is a good idea to move outward immediately, while still trying to DPS Kael'thas as much as you can. A healer with an AoE, such as a Priest, or HOTs like Druids, is tremendously helpful for this fight, whereas Paladins and Shamans will have extreme difficulty keeping an entire group alive due to the nature of their healing. There is no tanking at this point. Ranged DPS may continue firing upon Kael as opportunities present themselves, but the priority is to above all give the orbs a wide berth.

After 30 seconds Kael'thas will tire and Gravity Lapse will end, giving you a few seconds to freely attack Kael without reprisal. Kael takes 50% more damage in this state. After 10 seconds, he will get back up again and re-cast Gravity Lapse (repeat Phase 2), so try and do as much DPS as you can while you have the chance. Again, tanking does nothing.

It is possible for classes with at least 1 healing spell (such as an Affliction Warlock) to solo the boss for the remaining 50% on both Normal and Heroic, as Kael will no longer use direct attacks. For this reason, do not assume that your group has wiped if you lose some members during the encounter. Thus as long as there are any remaining survivors, do not release your body if you die during the encounter, lest you not get credit for the kill while you return back in spirit form. Alternatively—if you feel confident that the battle will last long enough, you can safely walk back, and will be transported back to the room Kael is in when he recasts gravity lapse.

In Heroic Mode, Kael's damage with Fireballs and Flamestrikes is increased.

After sixty seconds (and if still in phase 1) Kael will use the Shock Barrier ability (identical in behavior to the one he uses in Tempest Keep, and similar to the Priest in the Maulgar fight), which will absorb 10,000 damage. When the shield has taken the 10,000 damage, it will disappear and allow someone to interrupt the Pyroblast that he is casting. The Pyroblast will kill any tank that lacks sufficient spell damage reduction. It is very possible (especially with Bloodlust/Heroism) to take Kael to phase 2 before this time has elapsed, and if done he will not cast Pyroblast. Also note that the 60 second delay is perfect for a Warlock to time a Curse of Doom to hit during the shield, making it trivial to interrupt.

Paladins should bubble (after he has started casting) and then use Righteous Defense on Kael's target at the last second of the Pyroblast cast to prevent all damage and save a character from certain doom. Warriors can use Shield Wall and Last Stand to survive it (Spell Reflect will not work). Druid tanks are out of luck.

Note that the tank dying to the Pyroblast does not mean the group will wipe. Usually Kael'thas will hit 50% shortly after the Pyroblast and start phase 2. A tank is unnecessary in phase 2 since Kael does not move and does not directly attack.

Same as the other strategies. Stay away from the Orbs and DPS down Kael as much as you can. Good luck!

This works both in regular and heroic modes. Once phase 2 occurs, everyone should swim to the door near the ground, but not touching it as it will cause you to get shot up. Have the healer top everyone off while the orbs slowly make their way to the group. Since the group has several seconds before the orbs reach the group, this strategy works for all healer classes since the healer can remain stationary, heal, and know that everyone is within range without having to worry about the orbs' AoE damage. Once the orbs get close, have everyone swim around/above the orbs and get close to Kael'thas and start to dps. If timed correctly, the orbs will not have time to reach the group and the healer will still be able to remain stationary and heal without worrying about the orbs. Phase 3 should occur shortly and then back to phase 2. Rinse and repeat.

Phase 1 is relatively easy to heal for any class, so long as people are not taking the damage that's avoidable (flamestirke and hellfires). Kael's burst damage, especially on Heroic, is powerful but predictable. Solicit the help of any rogues/shaman to interrupt Kael's fireballs, and if you have a warrior tank, remind him to Spell Reflect and Shield Bash as often as he can.

Phase 2 of this fight, however, is the epitome of a Healer Check. Provided no one hits the bubbles and causes undue stress on their healer, either the healer has the skill, mana efficiency and gear to heal through the ticks, or he doesn't. Very little else is a factor in phase 2, as a good healer can technically solo Kael from 50 to 0.

Tree of Life is a good healer because it has many HoTs and many of them are instant, and this makes healers job easier at Gravity Phase.

Holy Priests are also exceptional healers this fight once Phase 2 begins. Make frequent use of Prayer of Mending and stay close to at least one other party member. It will exhaust itself in 5 seconds, restoring a great deal of health. Spam it every time it pops.

During Gravity Lapse, rely mostly on your Hots and instant cast spells. It is dangerous to stay in one place very long. If you have good +Healing, this shouldn't be a problem.

At the end of Gravity Lapse, use this time to top of your party with Circle of Healing, Prayer of Healing or Chain Heal, as insurance against someone touching a bubble in the next air phase. All DPS should be within range of your spells during this time.

A party member's death is both a blessing and a curse - while you will have less DPS on Kael, you also will have less damage to heal as Kael's Arcane Bolts will only be draining 4 members, reducing your chances of going OOM and killing everyone. Priorize your targets as follows:

The healer is, by far, the most important target here - if you die, it's most likely a wipe.

They are non-mana dependent (or much less mana dependent) DPS, and will still be fighting at 100% efficiency, even if it goes 10 Gravity Lapses.

They are vital, but can run out of mana. Not as important as the others.

After Phase 2, the tank is no longer a factor - he's just a bad DPSer. If it's between almost anyone else, and him, let him die.

At this point, they are mana/time sinks for you. Heal them as a last resort.

Paladins will need to be able to squeeze every bit of healing out that they can, as they are arguably the least optimal healers this fight, with only 1 instant cast, mana inefficient heal on a cooldown, no hots and no group heal.

It's a good idea for Paladin healers to throw Blessing of Light on everyone during the seconds between when Kael says: "I'll turn your world... Upside Down." and while being launched into the air. You will be hard pressed to heal while in the air, and will need to make the most out of each opportunity.

Use Divine Shield if the majority of your party has fallen below 50% life, even if you are healthy. Position yourself in the middle of the room to do this. This will give you range on all your party members, and allow you to heal without fear of the bubbles for 15 seconds.

Use Flash of Light and Holy Shock while in the air to keep as moble as possible. You will be amazed at how fast bubblse can creep up on you if you try for Holy Light. Save Holy Light for when Gravity Lapse ends, as you will want to top everyone off before the next Gravity Lapse.

If you use Divine Shield just before Kael casts Gravity Lapse you will not get thrown into the air. This makes it significantly easier to heal your party as you can move faster while on the ground as well as avoiding the couple of seconds it takes to re-orient yourself when thrown into the air.

How to solo in Cataclysm 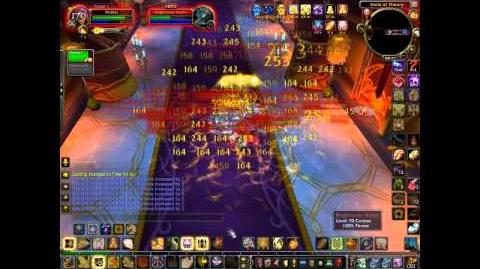 This humorous outburst from Kael'thas in Magisters' Terrace - shouted when he tired from Gravity Lapse - was a placeholder during the earliest phases of public testing:

Note: Kael'thas drops BOP versions of many outland recipes. These recipe drops are BOP, even if the recipe is normally a BOE world drop. They can only be looted by people who need the recipe and will not be seen unless someone in the group needs it.