This article is about the race. For the group of kobolds with the same name, see Elwynn Kobolds.

You no take candle!

Kobolds are little humanoids afraid to venture into the light for fear of their own shadows. Still, they fight ferociously to the death once backed into a corner.[3] (WRPG 240) They live in tunnels throughout Azeroth, but primarily in the Eastern Kingdoms. Most kobolds are usually easy prey, appearing in Elwynn Forest, Westfall, Loch Modan, Stonetalon Mountains, Thousand Needles, Arathi Highlands, and

Northrend, creatures known as snobolds who, while they appear similar to kobolds, wear snowballs on their heads and are generally subservient to the Magnataur.

The largest kobold known was Noggrin Onetooth[citation needed] who resided in Durotar, near the Barrens, until he was killed by Rexxar, Champion of the Horde.

Kobolds are rat-like humanoids that dwell in underground tunnels and spend their lives mining, primarily for gold. They are cowardly, cringing folk who live in fear of larger races and rarely venture outside their tunnels. However, while not powerful individually, they congregate in large numbers and can prove a nuisance and occasionally a danger.

Kobolds live in tunnels going deep into the Alterac and Redridge Mountains. Kobolds are most at home in the dark underground, as bright light causes them discomfort. As they cannot, however, see perfectly in the dark, kobolds also have a great affinity for candles.[2] (MG 94)

Kobolds are cowardly and flee from most combat. Nonetheless, they are tenacious and fierce when cornered, so when their lairs (or candles) are threatened, they attack with abandon. Unfortunately for them, they are not particularly intelligent and their tactics leave much to be desired: though they are naturally stealthy, they use this ability for escape more than ambush, and they usually try to overwhelm opponents with large numbers rather than defeat them using strategic cunning. Further, kobolds are sometimes so cowardly that they refuse to help their friends when they fall under attack nearby – these craven creatures will simply go about their business (sweating in fear all the while) and hope that the troublesome adventurers will leave them alone.[2] (MG 94-95)

Kobolds trade the gold and other minerals they unearth to goblins and other patrons for all the goods they need to survive; occasionally they purchase protection as well. They will take over abandoned mines and scavenge equipment whenever they can do so safely.[1] (MoM 58)

The grimy, vermin-like kobolds dwell deep within the crags and rocky caves of the Redridge Mountains. These slovenly creatures are best known for their penchant for digging and their underground excavations. Most recently, the Kobolds have found themselves falling prey to the merciless Riverpaw Pack of Gnolls. These cunning Gnolls have proven themselves to be merciless taskmasters, forcing the Kobolds into an existence of neverending drudgery. Since their enslavement, the historically meek Kobolds have grown bitter and aggressive toward any creature that meddles with their ceaseless labor.[4]

Kobolds stand between three and four feet in height and weighing between 70 to 100 pounds. The wiry creatures bear as much of a resemblance to a rat as it does to a humanoid and move with a rapid, hunched gait. Its nervousness is evident in its large, rodent-like eyes. This small, rat-like humanoid has a long snout. White hair pokes from beneath a ragged cap, on which perches a dribbling white candle. It hoists a leather pack over its left shoulder and a mining pick over its right. Its eyes glitter with wariness.[2] (MG 94)

Kobolds form loose clan lineages based on bloodline. There is nothing like marriage. Young individuals migrate between nests or between larger warrens. Kobolds of all ages prefer to sleep in large groups. While there is no overt structure of government, kobolds organize in loose groups to plan out digs and scavenging. While not particularly bright, kobolds have keen senses and a good ability to read situations.

One of their significant accomplishments is their alliance with the harpies. Kobolds offer equipment they scavenge in return for information. The two races protect one another by proximity. Kobolds first try to avoid combat if at all possible. Traps are used to gather small food animals and protect their warrens. When pressed, kobolds will flood over a target, looking to bite at vulnerable points. When facing a significant threat, they will abandon their nests and young. The race's knack with stealth and comfort in underground environments makes it well suited to the rogue and scout classes.[1] (MoM 58)

Many kobolds wear helmets that sport lit candles. These serve as more than just light sources, for kobolds develop an attachment to their candles and the light they shed. When a kobold wears or holds a lit candle, it gains morale. However, it doesn’t take much to extinguish one of these candles.[2] (MG 95)

Kobolds prefer to remain among their own kind. Many have a fear of the world above ground and of the races that live there. They are comfortable with their existence in the mines, chipping away with their picks and admiring each other’s candles. Kobolds must deal with a frightening number of enemies, being generally weak, and gifted kobold fighters who are able to protect their people rise quickly to the fore. These leaders are usually rogues, warriors, or healers. Rarer are the exceptional kobolds that leave their tunnels behind, striking out on a life of adventure. Most of these have a wanderlust they cannot otherwise sate; others feel the pull of riches more keenly than their brethren, and realize that adventure may be the best way to get what they need.[2] (MG 95) Friendly kobolds are possibly raised by night elves or some other race. Though ruled by fear, heroic kobolds emerge from time to time.[1] (MoM 58)

Kobolds employ simple earth magic, including ice shields and fire bolts, though most of their number are warriors, skilled with their mining picks. Their style of fighting involves attacking with as many allies as possible, and beating the offending person(s) to death with the aforementioned mining picks. Kobold geomancers are able to enslave Troggs, as the Troggs are creatures of the earth.

In World of Warcraft: Wrath of the Lich King, players are able to see arctic kobolds known as Snobolds. These Snobolds follow herds of magnataur for safety and mutual benefit on long hunts. [5]

Kobolds are a race of sniveling, rat-like humanoids who infest the deep tunnels of the Alterac and Redridge Mountains. Cowardly and pathetic by nature, they can be riled to action when backed into a corner. Kobolds have limited intelligence and usually try to stay away from populated areas where other, larger races dwell.[6] (W3Man 83)

One would think a race that evolved in the dark of tunnels would have developed some sort of dark vision or been completely blind, but this is not the case. Kobolds rely on the light of their candles to see. Kobolds are extremely protective of their candles and will attack anyone who comes near them, yelling something in Low Common, such as "You no take candle!"

There is evidence that the kobolds have a possible primordial connection to the beginnings of Azeroth, evidenced by their involvement in the imprisonment of the elemental princess Myzrael in the Arathi Highlands. Though kobolds usually show little intelligence, there are some cases where they exhibit greater than normal intelligence.

It is unconfirmed how Kobolds came to be. Whether they were from a Wild god, or the very life energy of Azeroth like the trolls, or a offspring of sorts from Troggs, is unknown. 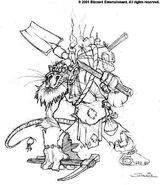 You no take candle! 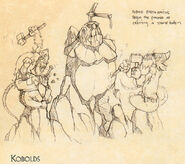