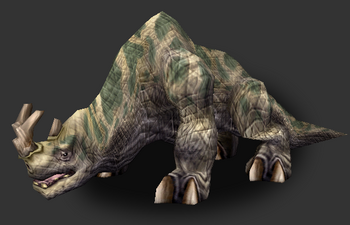 Kodo[1] (HPG 210) are massive reptiles with thick leathery skin that ranges in color from sandy brown to black. Most kodo have a large horn that sprouts from their nose, and some are even covered in thick woolly hair. Kodo range across central Kalimdor, but are particularly prevalent in Mulgore, where the rolling grassy plains are particularly suited to their omnivorous nature.

Wild kodo are normally herbivorous, however, and will not attack unless threatened.

The giant, slow-moving kodo of the Barrens are one of the most intriguing species of Kalimdor. Though gentle and ponderous by nature, these mighty beasts become fierce enemies when threatened or attacked. Many kodo hold a special bond with the benevolent tauren race. It is said that some rare kodo are bound to the spirits of the sky and storm. Thus, the tauren have legends about those they call lightning lizards, salamanders (not the flamewaker creatures), thunder lizards, and Storm Wyrm. Whether or not these behemoths actually have supernatural powers remains to be seen.

If one is discovered, it should be approached with extreme caution. It is said that these thunder lizards are much more hostile than their more common cousins and will attack without provocation. 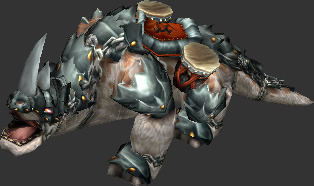 Swifter and slightly smaller than their wild cousins, kodo mounts nevertheless demonstrate the same resilience and fearlessness found in their untamed brethren, traits that serve them well when bearing their equally resolute riders.[1]

The epic​​ kodo can be bought at Bloodhoof Village. The PvP kodo is the Black War Kodo. Epic​​ kodo, unlike their slower cousins, have two rhino-like horns on their snout instead of just one. They also bear "War Drums" that hang from the sides of their saddles, as they did when they served the orcs in battle increasing the attack of any nearby orc.