Kodo mounts are mostly Horde only mounts. They were originally added as a replacement for plainsrunning (a tauren ability).

Tauren legends abound regarding the great horned kodos of Kalimdor’s Barrens. Some myths tell of rare kodos that are bound to the spirits of the sky and storm, thus allowing the colossal beasts to harness the powers of lightning itself. While kodos are generally considered gentle by nature, they are fierce opponents when threatened and have occasionally been known to devour their enemies whole.[1]

These mounts give a 60% speed increase on land. You can purchase these mounts from

Harb Clawhoof <Kodo Mounts>, in Bloodhoof Village in central Mulgore so long as your character has riding skill of 75 (obtainable at level 20). If you are playing as any race other than a tauren, you will also need to have Exalted reputation with Thunder Bluff. 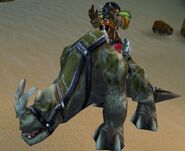 These mounts give a 100% speed increase on land. You can purchase these mounts from

Harb Clawhoof <Kodo Mounts> as well, so long as your character has riding skill of 150 (obtainable at level 40). They are reputation restricted like the apprentice mounts. 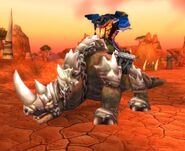 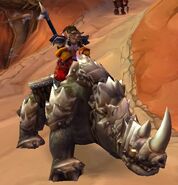 The Black War Kodo is available from

Raider Bork <Mount Quartermaster> in Orgrimmar for Honor points. You do not need to have exalted reputation with Thunder Bluff to purchase it.

These following kodos can be purchased from the Argent Tournament. You must have completed

Champion of Thunder Bluff or be a tauren to gain access to this quartermaster. 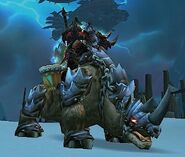 The Great Brewfest Kodo is a drop from Coren Direbrew in Blackrock Depths during the annual Brewfest event. It is the only Kodo Mount available to the Alliance.

These used the old kodo mounts graphics and are no longer obtainable. 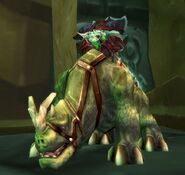