Kologarn is the sixth boss encounter in Ulduar released in patch 3.1.0. He guards the Shattered Walkway into central Ulduar where not only is he protecting the bridge, he is the bridge. Players fight not only him but two detachable arms that appear to be separate mobs that can be broken off of him.

Loken requisitioned Ignis the Furnace Master to create this towering giant as a guard to the Shattered Walkway. His oversized proportions allow Kologarn to easily crush any intruders who attempt to reach the inner sanctum.[1]

The fight with Kologarn is a battle for survival, not a DPS race. The stuns, Eyebeams, tank debuffs, and massive AoE damage all conspire to gradually pick off raid members until the raid cannot keep itself alive. That said, high DPS on the Right Arm is useful to ensure that it does not cast Stone Grip more than once before it is destroyed, and that it quickly drops its victims when it does cast Stone Grip.

As a battle for survival, beginning 25-man raids can bring four tanks and eight healers. At least three healers should be priests or shamans, capable of group heals to recover from AoE damage. Assign two or three healers to care for the tanks and two healers to keep the victims of Stone Grip alive. In 25-man raids, at least half of the damage-dealers should be capable of ranged AoE effects.

The healing and tanking requirements of the 10-man fight are considerably less severe than the 25-man, but three or four healers and two tanks are best.

Kologarn remains completely stationary in this encounter at all times. He cannot be turned or range tanked. If his aggro target is not in melee range, he casts Petrifying Breath on the raid, which causes a wipe. His arms do not need to be offtanked, but can be separately targeted and hit within Kologarn's hitbox. Since their hitbox overlaps with Kologarn's, melee attackers should face his torso, not the arm itself.

Melee, position under the Left Arm (on the right side) for 25-man. Any position is OK for 10-man. Face the torso.

In 25-man, two or three tanks on the torso, position front and center. Only one is required for 10-man.

One Rubble tank, position under the Right Arm (on the left side).

Ranged damage-dealers and healers, position in a line across the middle of the room. Stay out of melee range to avoid spell interrupts. Make sure that there is room to the back wall, and there is nobody directly behind you.

For 25-man, two to three tanks establish a taunt rotation on Kologarn. Every 10–15 seconds, he casts Overhead Smash. This applies Crunch Armor, which reduces the tank's armor by 25% per stack and lasts 45 seconds. Once it gets to two stacks, a tank without the debuff taunts the boss and takes over. Keeping all tanks alive is vital in order to rotate the debuffs.

For 10-man, Crunch Armor expires quickly, so no taunt rotation and only one tank is required on the boss.

All damage-dealers, attack the Right Arm until it is destroyed. Destroying it damages the torso, and eventually kills the boss.

Killing an arm spawns a pack of Rubble earth elementals, which are picked up by a tank and killed immediately. In 25-man mode, the Rubble elementals have a point-blank AoE damage spell called Stone Nova which quickly kills any nearby characters that are not tanks. Keep away from the the Rubble and kill them with ranged AoE effects while melee attackers hit the body or the Left Arm. In 10-man mode, the Rubble can be dragged to the center and hit by melee attackers. Once all the Rubble are dead, attack either the Left Arm or the body, depending on the strategy. The Right Arm respawns 60 seconds after it is destroyed. When it respawns, all damage-dealers attack it again.

Kolgogarn regularly casts his Focused Eyebeams at a random member of the raid, generally preferring a character who is not at close melee range. The Eyebeams slowly follow the target, kicking up stone chips and inflicting massive damage on any character they touch. Targets of the Eye Beams should run to the back of the room, then out the door and down the stairs, until Kologarn stops casting the Eyebeams. Anyone in this path must get out of the way.

The hole that holds Kologarn is in fact a hole. Do not fall in.

The hit box for the boss and his arms is huge and shared. Melee can hit an arm from nearly the opposite side of the room. AoE attacks that hit one of the three targets always hit and damage all three of them. Therefore, abilities like Multishot and Divine Storm are very useful for inflicting extra damage on the boss.

Healers caught in Stone Grip or running from Eyebeams cannot heal. They should call out to let the other healers know who will need extra healing.

Stone Grip, Eyebeams, and Shockwave can all kill raid members quickly. Keep everyone a full health at all times. If you are having trouble keeping everyone topped off, bring in more group healers.

Kologarn is typically the fourth boss faced in Ulduar (after Flame Leviathan, XT-002 Deconstructor, and Razorscale). He outputs much more damage than any other raid boss seen before him. Healers may be in for a nasty shock, as they must work harder than they ever have before.

Overhead Smash can miss or be dodged or parried to avoid an application of Crunch Armor. This delays the time at which the next tank must take over and may allow Crunch Armor to expire. Therefore, avoidance gear is preferred over stamina gear on this boss.

Do not use AoE taunts on the Rubble elementals if you are not in melee range of the boss. Taunting the boss while out of melee range results in him casting Petrifying Breath on the raid.

The Right Arm is the primary target because Stone Grip, while it does less damage, is more dangerous than Shockwave. Stone Grip, in 25-man fights, can randomly stun multiple healers, leading to deaths and eventually a wipe. Also, continually attacking the Right Arm causes it to release Stone Grip victims much more quickly. Shockwave, while nasty, is at least predictable and can be managed with group heals.

Inexperienced raids tend to wipe due to Eyebeams. Avoiding them is everyone's highest priority, period. If the Eyebeams target you, run directly out the door. Do not dodge other players. It is their responsibility to get out of your way, and there should be nobody in the doorway anyway. If you see Eyebeams on someone else, make sure that you are not standing between them and the door.

Hunters and Shamans can and should put up Aspect of the Wild or Nature Resistance Totems to substantially decrease the damage from Shockwave and Eyebeams. This helps tremendously in keeping the raid alive, and is well worth the loss of damage output on the boss. The hunters or totems should be placed so that the auras cover the entire room.

The first Right Arm tends to die quickly and easily, but things can get messy after that. Use Bloodlust or Heroism when the second Right Arm appears, to keep it from casting Stone Grip more than once.

Kologarn's quotes are a reference to the Black Knight of Monty Python and the Holy Grail. Also, the phrase "YOU FAIL" is used by many WoW players as an insult.

Kologarn is also seen in the 3.1.0 Ulduar trailer. It is safe to say he is responsible for driving out the famous explorer Brann Bronzebeard from Ulduar nearly killing him with his eye beams in the process, as that is the farthest in Ulduar he is seen.

Kologarn does not have a hard mode.[2] 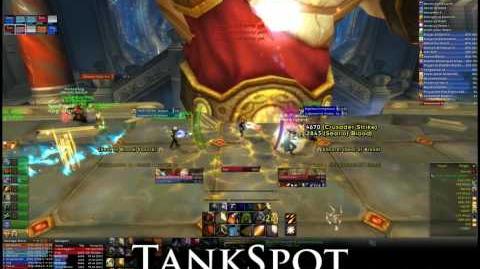 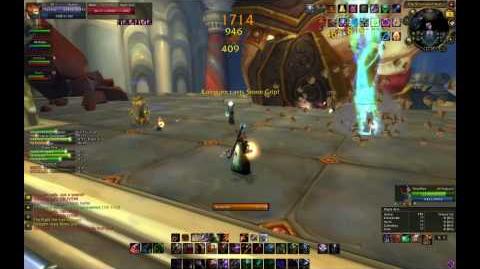 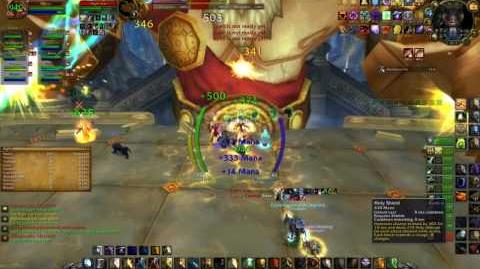 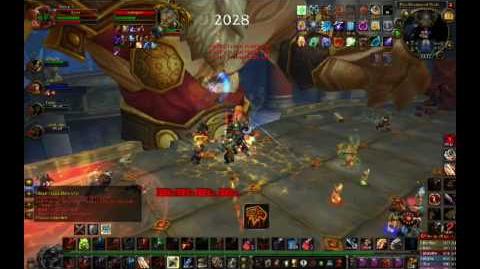 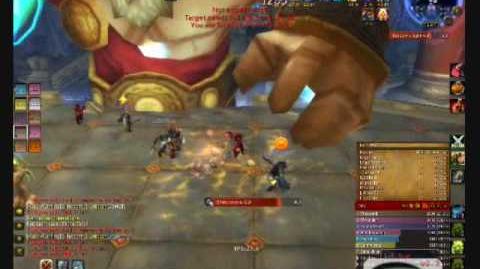 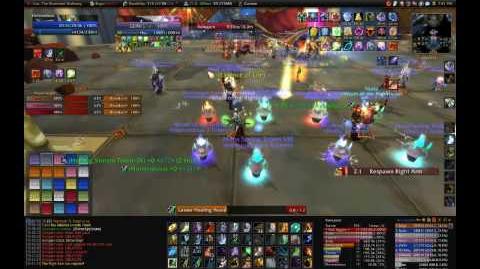 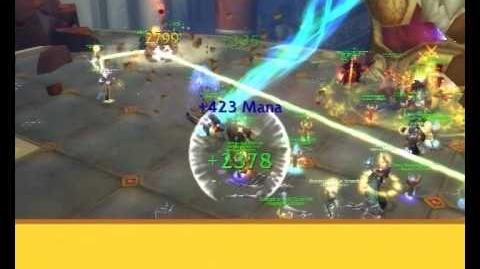 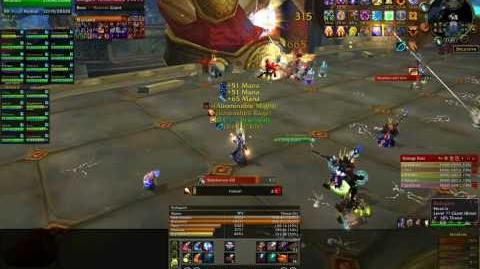