The kvaldir, or tuk-hariq (meaning walkers of the fog/sons of the mist), are fearsome seafaring vrykul raiders who roam the seas raiding ships and coastal settlements.

Awakened soon after Shield Hill in the Howling Fjord was defiled by pirates[2][3][4][5], they came upon the beaches of the Borean Tundra and Dragonblight from unknown locations. Due to most of the beaches being controlled by the tuskarr, they set on destroying them first, among some naga as well.

Led by Drottinn Hrothgar, they recently took over a tuskarr village on an island off the northern coast of Icecrown and renamed it Hrothgar's Landing. It is now a mist-shrouded staging point from which they launch attacks against Silver Covenant and Sunreavers' ships in the waters between the island and Icecrown.

The mist carries legend, of Horde and Alliance warriors alike, venturing into it only to never be seen again.

Very similar to vrykul, these creatures are covered in green scales, barnacles, and seaweed. When they die on land, they evaporate, leaving behind only their weapons and any seaweed or objects that were on their bodies. When killed in the water, they leave behind intact corpses.they also only appear on the shore.

In the expansion World of Warcraft: Cataclysm, Kvaldir make an appearance in Ruins of Vashj'ir in a form of flashback quest chains beginning with

[81] Visions of the Past: The Invasion of Vashj'ir. They are also fighting Azshara's naga.

Quetos: Kvaldir Pillager says: These waters were ours even before the Sundering!

A smaller group, named the Skadir, is believed to have broken off the main clan, also known as the Kvaldir.

The kvaldir cannot exist outside the mist with the exception of the raiders in Kaskala, however, this could simply be that Blizzard opted not to cover the area in mist. It is possible that the kaskalan Elder Muahit's quest to secure the aid of the elements against the kvaldir raiders is impacting the area. He mentions that the weather is assisting the Tuskarr, possibly by driving away the mist.

Battle Plans of the Kvaldir

In Patch 3.2.2, a quest starting with Kvaldir battle plans involving series of devastating raids on Kalimdor and Eastern Kingdoms settlements was added. 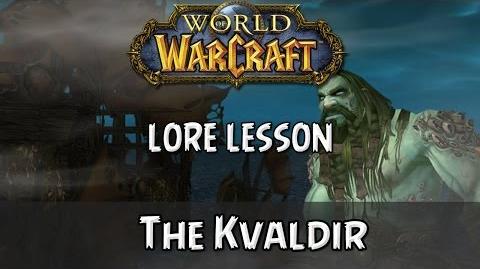