For information on how to defeat Lady Vashj in World of Warcraft, see Lady Vashj (tactics).
For statistics in Warcraft III: The Frozen Throne, see Naga sea witch#Statistics from Warcraft III (of Vashj).

Lady Vashj (pronounced /vɒʒ/ — somewhere between Vash and Vosh) was born in the city of Vashj'ir[4], where her mother, Lestharia Vashj, was the high leader and matron. She somehow left her homeland, and came to the city of Zin-Azshari, capital of the night elves, sometime before the War of the Ancients. Once chief among Queen Azshara's handmaidens, Vashj became one of the serpentine naga when Azshara and her followers were sent to the bottom of the sea during the Great Sundering.

Ten thousand years later, Vashj answered Illidan Stormrage's call and followed him first to Lordaeron, where she met up with Kael'thas Sunstrider and rallied his blood elves to Illidan's cause, and then to Outland when Illidan deposed Magtheridon as lord of the shattered world. As leader of Illidan's naga, Vashj and her followers set up shop in Coilfang Reservoir in Zangarmarsh, where the naga began to pump the lakes into their underground lair. During the Burning Crusade, adventurers invaded the Serpentshrine Cavern where Vashj made her lair and slew the Coilfang matron, her dying breath an apology to her master.

Lady Vashj was voiced by Barbara Goodson[5] in Warcraft III: The Frozen Throne and World of Warcraft: The Burning Crusade. Goodson described her as "strong, full of conviction and passionate".[6]

Vashj was Highborne (quel'dorei) and rose through the ranks to become Queen Azshara's chief handmaiden. She was described as "quite beautiful, with exotic, feline eyes" although she was still not as beautiful as Azshara herself. Vashj was fanatically loyal to Azshara and was infuriated when the queen offered to make Tyrande Whisperwind her majordomo; not only infuriated, but filled with jealousy that Tyrande's beauty and skill surpassed her own[citation needed]. Vashj tried to kill Tyrande on several occasions, even pretending that she would help Tyrande escape from her prison, but was stopped each time by the intervention of Elune.

Note: Vashj never encountered Tyrande in the Third War. Lady Serpentra and Serena Scarscale fought the battles in the Broken Isles, and the force that defeated Vashj at Dalaran was led by Malfurion.

Vashj appeared as a villain in Terror of the Tides, a player character in Curse of the Blood Elves, and an adversary in Legacy of the Damned.

When Queen Azshara finally decided to make the naga's existence known, she sent Lady Vashj to establish contact with the surface dwellers. Lady Vashj met the demon-cursed Illidan and they struck a pact to aid each other against their night elf enemies.[2] (MoM 189) Vashj and her people were quick to join him, and their first act of loyalty was to facilitate Illidan's escape from Kalimdor, and bring him to the Broken Isles and the Tomb of Sargeras.

But the naga knew that Maiev the Watcher would be quick to follow, and so Vashj rallied her forces and battled the night elf's forces as they made their way to the Tomb, where Illidan and Vashj then stole away into its ancient corridors. When Maiev confronted Vashj, the sea witch told Maiev that her justice had no place there, and when the warden demanded how she would know anything of the night elven way, Vashj replied by telling that the naga were night elves once. Then she slithered off to join Illidan in the Eye Chamber. Illidan used the Eye of Sargeras to collapse the Tomb, and then escaped. Vashj took the majority of the naga to Lordaeron to make preparations for the next phase of their plan while Illidan and some servitors remained behind to deal with Maiev for good.

After careful observation, Vashj saw that Kael'thas, prince of the ruined Quel'Thalas, was the perfect new recruit for the new order Illidan was fashioning. And with the ample forces Maiev had brought to Outland, Vashj knew that they would need reinforcements. Kael had been under the oppressive whip of a racist human general named Garithos, who had sent Kael and his people on missions that any laymen could do while keeping the elves from the front lines. Kael first encountered Vashj when he found his shipyard ruined, and thus his means across the river scuttled. She approached him with an offer of assistance. Kael was hesitant, having fought the naga alongside Maiev at Dalaran—but Vashj insisted, and Kael accepted. Vashj watched Garithos' rage at Kael's dealings with her. But Garithos then sent Kael and his elves against an invading force of undead. Kael was eager to prove himself in battle, but Garithos recalled Kael's support, siege, and cavalry units to the front lines, leaving Kael with a very meager standing force.

Vashj felt that the time was ripe to intervene, and so offered her troops to strengthen his own. Kael was again hesitant, but Vashj insisted that it was better to survive than to obey the word of a rash tyrant. Together they defeated the undead forces and recaptured their bases. When Garithos approached, Kael ushered Vashj away, saying he could not ensure her safety. She did, but watched as Kael and his people were taken away in shackles supposedly for betraying the Alliance by siding with the naga. Vashj infiltrated the dungeons of Dalaran through the sewer system and found Kael, killed his guards, and freed him. Vashj told Kael that escape was possible through the remains of the gate Kel'Thuzad had erected to summon Archimonde. She helped Kael escape the jails and destroy Kassan's forces, robbing valuable items from the magical stores as they went, and freeing his people from their cells. Upon reaching the streets, however, Garithos proceeded to assault the portal with his forces. Vashj, Kael, and some blood elf engineers raced to build defensive structures to stop them before they reached the portal. After a perilous battle, however, they were victorious and fled through the portal to Outland.

When they came through the portal to the shattered landscape of Outland, Vashj explained that it was once the homeworld of the orcs, but the Cataclysm had turned it into the barren, broken waste it now was, and that Illidan was somewhere waiting for them. Vashj and Kael searched fruitlessly for days, until Vashj caught a familiar scent on the wind. Illidan had been captured by Maiev and was being hauled back to her base in a magical prison wagon. Vashj and Kael battled Maiev for dominance, but finally reclaimed the wagon and brought it back to their base, where Illidan was freed. Illidan thanked Vashj for her loyalty, but Vashj gave credit to Kael. Illidan then told them of his plan to rule Outland by overthrowing the current ruler Magtheridon.

And so Vashj and Kael defended Illidan as he closed the dimensional gates that supplied Magtheridon with his reinforcements. After they were all successfully closed, Illidan's armies marched on the Black Temple. Vashj and her naga infiltrated the aqueducts and attacked the Black Temple from a side entrance, as Akama and his Broken destroyed the automated defenses. Vashj was responsible for killing the Mistress of Torment with aid from only a few myrmidons and snap dragons for support. Eventually, they battled their way to Magtheridon, and in a titanic battle, defeated him.

But Kil'jaeden appeared, and mocked their foolhardy attempt to betray him. He then commanded that they find the Frozen Throne and destroy it.

Vashj, Kael, and Illidan went back to Azeroth and advanced upon Northrend, only to be met at every turn by Arthas and Anub'arak, Ner'zhul's prime generals. Finally, they reached the Frozen Throne, and the forces squared off against one another. But, in the end, Arthas opened the doors to the Throne Chamber. Illidan was there to greet him, and the two battled on the face of Icecrown. After a short fight, Arthas defeated Illidan.

To this day, Lady Vashj still serves her master Illidan in the wastes of Outland. Though her heart and loyalties lie with her Queen and her race, Vashj enjoys working with Illidan and sowing discord and terror wherever she can.[2] (MoM 189)

Under the command of Vashj the naga recently enslaving tribes of the Broken in an effort to bolster the naga's workforce and further their agenda in Outland. Nearly all of the Wastewalker tribe has been captured and put to work to drain the waters of Zangarmarsh. To command the engineers who maintain and operate this machinery, Lady Vashj hired the renowned Mekgineer Steamrigger, a gifted gnome technician whose illness has damaged his sanity.[7]

Vashj herself carefully monitors Coilfang’s operations from her seat of power within Serpentshrine Cavern. Far more at home here among the waters of the reservoir than locked within the cold stone walls of Black Temple, Vashj maintains a close eye on her minions and personally oversees the draining of Zangarmarsh.[8]

During the Burning Crusade, adventurers invaded the Serpentshrine Cavern where Vashj made her lair and slew the Coilfang matron, her dying breath an apology to her master.

Attunement to the Battle of Mount Hyjal

After the Sundering ten thousand years earlier, Illidan had taken seven vials containing the waters of the Well of Eternity in order to create a new one at the top of Mt. Hyjal. Illidan used three to create the new Well of Eternity, but it was not known what happened to the other four until recently. It was revealed that Vashj received one of these vials, as did Kael'thas. In order to access the Battle of Mount Hyjal in the Caverns of Time, one must enter Serpentshrine Cavern, Vashj's inner sanctum. The players must then slay Vashj and take her Vial of Eternity. Since the 2.4 patch Black Temple and Mount Hyjal no longer require attunement.

Vashj leans on her combat abilities more than her magic, but she is still a formidable sorceress. She is peerless with her magic bow. Her longbow, Frostfathom, was crafted by the Moon Guard and enchanted by Queen Azshara.[2] (MoM 173) Lady Vashj favors wind and water elemental powers when casting offensively. A retinue of naga myrmidon bodyguards always accompanies her.[2] (MoM 189)

Before her monstrous transformation, Vashj was described as being "quite beautiful", dressed in appearance similar to her mistress, but with a lower quality and class. The only thing that stands out from the others are her silver, exotic, feline-curved eyes.

After the Great Sundering, her appearance is like any other sea witch, but still, with a higher, diplomatic position. She had turquoise/light blue skin, six arms with long, clawed and webbed fingers, a long, scaly tail (which she jokes about tripping over it from time to time) with pink fins, and snakes instead of hair on her head, serving as her "extra" eyes. She had about eighteen snakes on her head, and one of them is actually a moray eel. Her face, is, however, like almost all of the other female Nagas; almost elven beauty, but with exotic, ascetic markings.

Vashj in the dark

Lady Vashj of the Naga.

Lady Vashj as a Highborne Maiden of Azshara. By Arcane-Villain. 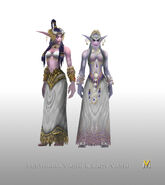 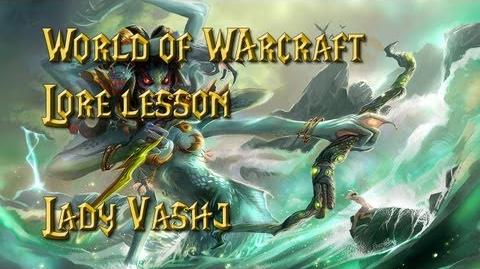 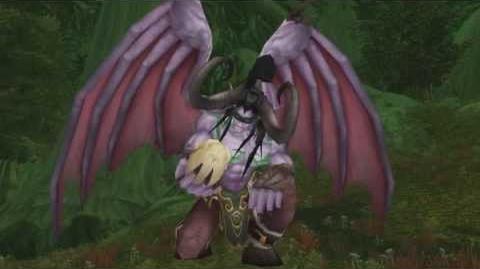 She was a healer and sorcerer in the Warcraft RPG and was changed to a shaman and mage in the World of Warcraft RPG.[9] (WoWRPGCD 3)