Legends of the Land 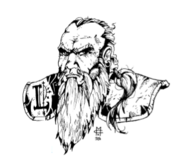 Sired and raised in the Kingdom of Azeroth, Anduin Lothar has spent well-nigh all of his fifty-seven years in service to the lands he calls home. A proud and noble warrior, Lothar was accredited a position within the King's Honor Guard at a considerably early age. After becoming a Knight and rising to the position of Armsman to the Brotherhood of the Horse, he undertook a quest to seek out the Tome of Divinity - a task which all but killed him. Upon returning the sacred writing to the Clerics of Northshire, Sir Lothar led the armies of Azeroth into battle against the Orcish Horde. As the Horde ultimately ravaged the Kingdom of Azeroth and killed its advocate, King Llane, Lothar rallied his countrymen and charted their retreat across the Great Sea - and onto the shores of Lordaeron.

In recognition of his services to his people, Sir Lothar was given the title of Regent Lord of Azeroth. As commander of all land and air forces within the Alliance, Lothar has made a solemn pledge to avenge both King and comrades by vanquishing the Orcish Horde once and for all. 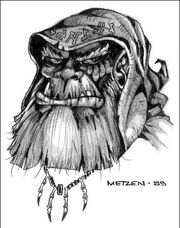 Gul'dan - Warlock of the Inner Circle and Destroyer of Dreams - is the true mastermind behind not only the inner workings of the Horde, but those of the secretive Shadow Council as well. Trained in the arts arcane by the Daemon Kil'jaeden, Gul'dan is perhaps the most powerful Warlock ever to walk the temporal plane. Obsessed with discovering the legendary Tomb of Sargeras, he hopes to obtain ultimate power by deciphering the secrets ascribed by the Daemonlord since times long forgotten. Gul'dan has used his magiks to bring into bring a host of servants for the Horde. Necrolytes, Ogre-Magi, and the dread Death Knights are all results of his endless experiments with the forces of magic. Although his spawn of his work have strengthened the Horde, the true loyalties of Gul'dan lie only with himself and his quest to become omnipotent. 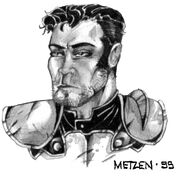 Apprentice to the aged Archbishop Alonsus Faol who was the leader of the Holy Order of Northshire Clerics that guided the kingdom of Azeroth during the First War, Uther Lightbringer learned first hand that faith alone would not defeat the terrible Horde. Many of the Clerics were slain during the First War, and so the Archbishop devoted himself to rebuilding the Order as to provide the citizens of Lordaeron with hope and faith. Knowing that this war with the unholy Orcs could not end soon, Uther discerned that the Archbishop's new Order must be able to defend the people as well as heal them. Thus, young Uther took up sword and shield and issued the call to the most pious amongst the Knights of Lordaeron. Many great Knights heeded Uther's beckoning and joined the Order which became known as the Knights of the Silver Hand. With the strength of arms - and faith - possessed by these Paladins, Uther hopes to bear witness to the free people of the Northlands that the Orcish Horde can be cast back into the stygian pits that spawned them. 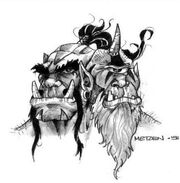 Initiate of the fifth circle of the Shadow Council and Chieftain of the Twilight's Hammer Clan, Cho'gall is one of the grimmest and most respected leaders within the Horde. Cho'gall was the first of the Ogre-Magi, having tutored himself in magic before the Horde's passing into Azeroth. Cho'gall has a special loyalty to Gul'dan who helped the struggling yet determined ogre to master the arcane energies of the Twisting Nether. Cho'gall is a firm believer in his clan's sacred mission to bring oblivion to all peoples of the far-realms.

The feared, rogue Troll known as Zuljin has gained a great amount of notoriety over the years. Known best for his daring raids on guarded elven villages, Zuljin brought together many of the nomadic Troll warparties and forged them into and intimidating fighting force. The Trolls revere Zuljin and follow his leadership unconditionally. When approached by the Doomhammer about joining up with the Horde, Zuljin initially declined. But with the increased tensions between the Trolls and Elves due to the coming war, Zuljin knows that only an alliance with the Orcs will save his people.

Creatures of the Land 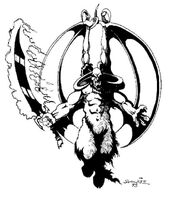 Daemons are the ancient and corrupt denizens of the lower planes. These winged creatures of fire are legendary for their fondness of destruction and brutal cruelty. Daemons harbor a lustful hatred for all mortals and hunger for any chance to bring pain and death upon them. It is rumored that Gul'dan has entered into a pact with a sect of Daemons loyal to the Daemonlord Sargeras who are willing to aid the Warlock in finding their master's Tomb.

These unfortunate warriors gave their lives in battle only to be brought back into soulless servitude by arcane Orc magiks to fight for the Horde. Rising up from the battlefield, the Undead tirelessly hack and slash at their terrified enemies. These skeletal horrors retain none of the personality or emotions that permeated their living bodies and thus will do their master's bidding until they are destroyed. Only mortal creatures such as the Humans, Elves, Orcs, Trolls, and Ogres can be bound by these dark powers and be remade into the Undead.

Resources of the Land

Mined from the rich earth of Azeroth and Lordaeron, this precious metal is commonly used in exchange for goods and services. As a rare substance that is always in short supply, Gold must be dug out from the rock and soil within establishes Gold Mines. Many of these Mines were abandoned when the Orc raids began and the workers fled for their very lives. Since the beginning of the War, these sites are frequently operated while under the protection of military forces.

Harvested from the abundant forests that inhabit all but a few regions in the realm, the uses for Lumber are nearly infinite. Once a tree has been felled and returned to the community, it is processed and made ready for use as Lumber. Craftsman then use this material to build many different structures and ships, as well as certain weapons and machines of war. Lumber may also be used in the research and construction of strange new devices - or by those adept in the arcane arts to aid with their magical studies.

Large pools of this highly flammable substance are found far beneath the surface of the sea. Special Platforms must be constructed in order to drill deep enough into the ocean floor to get at this sticky, black substance. Dark oily patches, created by small geysers that form on the ocean floor and spew modest amounts of oil into the surrounding waters, serve as a beacon to Oil Tankers hunting for the rich black liquid. Although Oil is commonly used in the construction and powering of ships, it has been utilized in the development of both experimental flying craft and extremely powerful weapons

Retrieved from "https://wowwiki-archive.fandom.com/wiki/Legends_of_the_Land_(Azeroth)?oldid=2463976"
Community content is available under CC-BY-SA unless otherwise noted.