Ley-Guardian Eregos is the last boss located in the Oculus. He is the supreme leader of the Oculus and the ley-line conduit operation. The battle against him involves the use of the drakes.

Note: "Charges" for the Amber drake are per drake / per target. i.e. One drake cannot use up the charges placed by another. So, for the final boss, you should alternate between using Temporal Rift and Shock Lance. Use Temporal Rift until *your* stack of charges reaches 10, then Shock Lance, then back to Temporal Rift. You DO NOT need to channel Temporal Rift for the full duration to reach 10 stacks! The rate that stacks are added depends on how much other damage is being done to the boss while you channel. If you use Time Stop, every mob present will immediately gain 5 stacks for you. This is a very handy tool for whelp cleanup since whelps with 5 stacks can be one-shot using Shock Lance.

Note: As long as the ruby drake is mindful to use Martyr as often as possible, it really doesn't matter who has aggro from the boss - all damage will be redirected to the ruby. Evasive Maneuvers allows you to evade the damage from Martyr.

Note: As long as the amber drakes keep Temporal Rift up, it is quite easy for a single Emerald drake to keep Touch of the Nightmare up while also healing. The Temporal Rift debuff doubles the self-healing from Leeching Poison so you have plenty of HP to burn, and you only need to refresh it every 30 seconds.

Note: It helps a great deal to keep three stacks of Leeching Poison rolling on Eregos. This usually requires ending Dream Funnel or Touch of the Nightmare early, but prevents you from having to reapply all three stacks of the poison again.

Eregos is a much simpler fight than previously, a standard 'cookie cutter' group is a ruby drake, an emerald drake, and three amber drakes. Please note that players' roles in the combat party do not matter when choosing a drake, the only factor to consider is gear quality. Since the drakes' abilities scale based on gear, everyone should equip their highest item level equipment in every slot, regardless of stats.

At the beginning of the encounter the ruby drake should pull and use searing wrath as fast as possible while the emerald drake stacks leeching poison to three, during this time all three amber drakes should use temporal rift.

Once enough evasive charges are accumulated the ruby drake should use the martyr ability followed by evasive maneuvers with the emerald drake ready to restore lost health with dream funnel.

Amber drakes should wait to use their shock lance until they have 10 shock charges on the boss. When the boss enrages, time stop should be used. Players should clearly establish a use order in advance to prevent unneeded time stops.

The ruby drake should not worry about losing threat once the initial round of shock lances from the amber drakes has passed, but should still use searing wrath to continue to help amber drakes generate shock charges. From here the main role of the ruby drake is to pick up whelps in order to continue to generate evasive charges for the martyr and evasive maneuvers combo.

The emerald drake should also keep leeching poison to three stacks at all times and not worry about adds. If the group is not taking considerable damage the emerald drake can use touch the nightmare, preferably while temporal rift is on the boss. Be aware that the boosted damage will likely cause the emerald drake to get top threat, so use this only if there is no threat of dying immediately.

Done right, Eregos should fall quickly, in roughly two minutes or less, depending on the group.

There is very little difference in this fight in terms of group makeup, however Eregos gains a new ability in heroic that players should be aware of called Planar Shift.

Eregos will use this ability twice during the encounter, during which time he will be immune to all damage and create several planar anomalies that will float towards players. These must be avoided at all cost, preferably with the group sticking together, however some players prefer to scatter and regroup once planar shift ends. The danger in scattering is that if a drake is hurt badly during this phase the emerald drake rider may not be able to get in range to heal the drake before it dies.

Emerald drakes should not attempt to heal during a planar phase as they cannot move while channeling, save any healing for after the phase ends as it is far worse to lose the emerald drake than to lose a ruby or amber drake.

Other than the planar phase this fight is mostly unchanged and the normal mode strategy works well.

Perhaps the simplest void to do, it is recommended that you use two emerald drakes and three amber drakes, however a well geared and experienced group could use one emerald and four amber drakes.

The key to winning this fight use keeping leeching poison stacked at all times while all amber drakes use their temporal rift to build 10 shock charges and then use shock lance. It is also good for one emerald drake to be in charge of keeping touch the nightmare on the boss to reduce his incoming damage.

Time stops should be saved until Eregos enrages, it is vital that an order is established so that no unnecessary time stops are wasted.

The emerald drakes can easily control any whelp adds by using their tab target to stack leeching poison on them, however they should ensure that they don't let the poison drop from the boss because it is vital to keeping the dps from the amber drakes very high.

For an alternative method, see the Amber Void strategy.

Also relatively simple to accomplish, players can simply choose five emerald drakes for this achievement, or four emeralds and one ruby to mitigate damage. Using five emeralds will allow players to get the Ruby Void achievement at the same time.

Simple enough, players need only keep leeching poison stacked to three at all times while taking turns using Touch the Nightmare. Ideally, by rotating the use this will cause Eregos to switch targets if he is dealing too much damage to a single drake. This negates the need of having to use dream funnel to heal another player.

When whelps appear simply stack leeching poison on them. Also ensure that touch the nightmare is reapplied after each planar phase.

This is possibly the most difficult of the three voids to achieve, but can be accomplished with four amber drakes and a ruby drake. It is not recommended to attempt this achievement without a well geared group.

From this point, the amber drake who did not shock lance the first round should wait until the other amber drakes have temporal rift on the boss again, this will cause the other drakes to immediately have 10 shock charges thus allowing for a very high speed burst of the boss.

If this is done well enough the boss will planar phase very fast leaving minimal time for an enrage, however when this occurs a time stop must be cast to prevent damage. An order should be established to prevent unneeded time stops.

While attempting this void it is very common for drakes to be killed, however players should never stop their rotations because this fight is still winnable down to the last drake provided the boss is near death.

You can get both the Emerald and Amber Void achievements by using five ruby drakes. The chain effect from Searing Wrath can easily kill the whelps if everyone just attacks the boss. Rotate Martyr use when you have Evasive charges and simply run away when Eregos phase shifts.

Another method that can be done to obtain both Emerald Void and Ruby void is to use 5 Amber drakes. Have one person use Temporal rift while the other 4 just use shock lance; then when the 10 stacks for the first player is up, everyone else swap to channeling and the first guy who channeled can then shoot his Shock Lance which equals to about 100k damage doubled 4 times by the effect from Temporal Rift. Rinse and Repeat. Normally the whelps don't spawn but if they do just have someone do a time-stop and shoot them down, 5 stacks from time stop should be enough to kill them in one shot. When he 'bubbles', just run away and when he re-emerges repeat the dps phase.

Emerald Void can also be done easily by simply having the healer not use their drake. The healer stands on the platform with the chest, and all the other players must stay in healing range except during Planar Shifts. After each Planar Shift, everyone needs to go back to the healer's platform. A well-geared healer can easily heal all the damage without having to worry about the vehicle mechanics.

Cache of the Ley-Guardian can only be obtained if Oculus is completed as a random heroic. 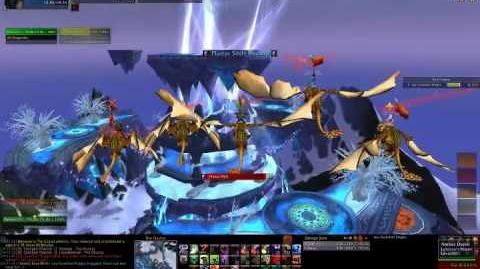