Were you looking for the boss in Scholomance,

Lilian Voss is a recently "recovered" undead, first uncovered by the player from a coffin inside the Shadow Grave of Deathknell. The player, while leveling in Tirisfal Glades, will often either encounter or hear about Lilian up until the player helps her kill High Priest Benedictus Voss, her father.

While the Forsaken would love to have her fighting for them, Lillian has not yet fully accepted her fate. Her quest for retribution will take her to dark places where adventurers may not wish to encounter her again.

From the moment of her birth, she was raised as a weapon against the plague as a member of the Scarlet Crusade. She studied stealth, sorcery, martial arts, and anything else that would make herself stronger. She gave up her childhood for her father.[1]

After she died, Lilian was raised as an undead by the Forsaken's Val'kyr. When Horde players approach her to recruit her into the Forsaken's ranks, she runs away in denial of her undeath, claiming that her father will protect her. [2] Later, she was found by Novice Elreth in Deathknell. To show her what she really is and convince her to join the Forsaken, Novice Elreth gave the adventurer a mirror. After she saw her face, Lilian ran away, again denying her life as an undead.[3]

Upon fleeing, she was captured by a lieutenant of the Scarlet Crusade. Lieutenant Gebler, supposedly a friend from her past, brings word from her father. He had initially perceived her as a possible weapon against his enemies, but has now denounced her as a daughter and ordered her execution instead.[1] As Gebler prepares to execute her, Lilian breaks free and kills him, ordering the adventurer to leave her be. She sought retribution against her father and all of the Scarlet Crusade.

Later, she encountered an entire squadron of the Scarlet Crusade and killed them all. The adventurer discovered this and accompanied her as she confronted her father, the high priest. After making a path to his tower, she killed her father's bodyguards before confronting him. She choked him, hoisting him high in the air before dropping him to his death. Lilian then walked away.

It should also be noted that many of her attacks cause her victims to erupt in purple flames, leaving her mark throughout Scarlet encampments in Tirisfal Glades and the Western Plaguelands. It is worth noting, that many of the Twilight's Hammer magic users use the same purple flame, and that color is prevalent among both their encampments and uniforms. Pointing to a possible connection between the Crusade and the Cultists.

She may be a reference to Liliana Vess from Magic: The Gathering.

The undead Lilian Voss strangled her father--a high priest of the Scarlet Crusade--for treachery, and then started a rampage that eventually led her into the shadowy corridors of Scholomance. Rather than destroy the intruder, Darkmaster Gandling graciously decided to show Voss how to embrace her grim fate. The anger and runeblades she had once directed at the school are now turned toward Gandling's enemies.[4]

Lillian is in the room full of raised skeletons. Seeking revenge against Darkmaster Gandling, she chases him through Scholomance, only to succumb to his powers over the undead. Players are forced to fight her body and soul before she is able to break free. The last she is seen, she instructs players to leave her to die alone in peace, which they do.

Lillian can show up as a visitor in the tavern building in the player's Garrison, proving that she did not die in Scholomance. It is unknown how she had survived though. She grants the quest The Soulcutter which gives the Lilian's Warning Sign toy as a reward. 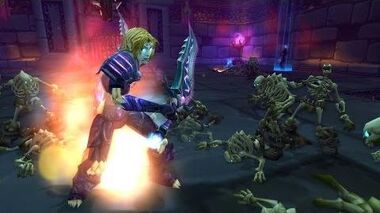 The Story of Lilian Voss Lore