Little Timmy was a villager who first appeared in Warcraft III: Reign of Chaos. He was a young boy and son of Alicia. He lived in a farmhouse in a village between the Silver Hand encampment and Strahnbrad at the beginning of the Third War. While Strahnbrad was under attack by the Blackrock clan, Little Timmy was kidnapped by a pack of gnolls. Prince Arthas rescued Timmy at the behest of his mother.[1]

Little Timmy appeared again in Warcraft III: The Frozen Throne. He and his mother Alicia can be found in Theramore in chapter II of The Founding of Durotar, "Old Hatreds", indicating their escape from Lordaeron, probably as part of Jaina Proudmoore's Human Expedition.

The following Timmys may or may not be the same kid, there have been no confirmation by Blizzard Entertainment and probably it's just a Blizzard joke which may never be resolved. 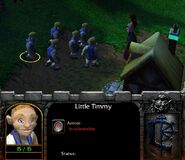 Little Timmy back with his family after being saved by Arthas; from Warcraft III: Reign of Chaos. 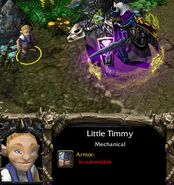 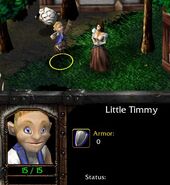 Little Timmy and Alicia in Theramore; from Warcraft III: The Frozen Throne.

Also, there is a penguin named Little Timmy in "The Return to Northrend". He doesn't have any purpose, he may just be one of Blizzards Easter Eggs.