Llane Wrynn I was the ruler of the Kingdom of Azeroth during the First War. He was the child of King Adamant Wrynn III and Lady Varia, and the father of King Varian Wrynn. He is also the grandfather of King Anduin Wrynn.

Llane was born in the year 564 by the accounting of years formerly used in that kingdom. In 577, Llane reached to the Age of Ascension and was given the full title Prince of Azeroth. During the evening feast arranged to honor the young Prince, the great wizard Medivh, who had been absent from events of the world for years, interrupted, announcing his return to the world and giving an obsidian hourglass to Llane, symbolizing Azeroth's unending prosperity. The sands in the glass ran, but the top half never emptied into the lower half.

Six years later, Llane awoke in ordinary morning to find to his horror that the hourglass had almost completely emptied. As the last grain fell, an attack on Stormwind Keep by the orcs began. Although the orc attack was repelled, this marked the beginning of the First War that would last for years. Llane was sent with his mother to Northshire Abbey away from potential danger by his father, who in turn began to lead the battle against the orcs.

The next year, his father, King Adamant Wrynn III died, and at the age of twenty, Llane was pronounced King of Azeroth and continued the battle against the orcs for ten relatively successful years, during which the invaders were held back to the Swamp of Sorrows. King Llane Wrynn's son, Prince Varian Wrynn, was born to him in Stormwind City ten years before the First War.[1]

Ten years later, Llane was visited by a mysterious stranger who revealed herself to be Aegwynn, the mother of Medivh. She revealed that Medivh was behind the arrival of the orcs into the kingdom, warning that Azeroth would eventually have to deal with him.[2] (WC1manH 22-25)

Following the rise of Blackhand as Warchief, the war turned badly against Stormwind. Sensing that the final confrontation was at hand, Llane prepared to rally the armies of Azeroth against the orcs. Garona Halforcen was a close friend of Llane, but also secretly an agent of the Horde. As the orcs besieged Stormwind itself, Garona (under mental control of the orc Shadow Council) sorrowfully assassinated the beloved king and took his heart to the head of the Council, the warlock Gul'dan.[3] Garona knew from a vision she had seen in Karazhan that she was fated to kill one of the few men who accepted her for what she was, and thus it was King Llane's assassin who mourned him most of all.

A [statue of King Llane] can be found in Stormwind Keep; the plaque reads:

King Llaneω τ ϖ is also seen in Karazhan as the Alliance king piece in the chess event, his Horde counterpart being Warchief Blackhand.

In Patch 3.1, King Llaneω τ ϖ is seen during Yogg-Saron's vision of his assassination. Yogg-Saron also drops two pieces of gear apparently tied to King Llane: [Royal Seal of King Llane] and [Kingsbane]. The former is his symbol of office, stained with blood from his assassination. The latter seems to imply it was the weapon used to do the deed; it makes a good rogue weapon, and the flavor text is similar to Garona's feelings in the wake of her betrayal. How both items came to be in Yogg-Saron's possession is unknown.

King Llane is one of the protagonists of the Warcraft movie, set to take place during the latter part of the First War, after King Adamant's death. True to his character, he questions other nobles' assertions that the orcs are all beasts who should be destroyed and is shown to be sympathetic to them, as well as extending a hand to Garona as a bridge between the two races. 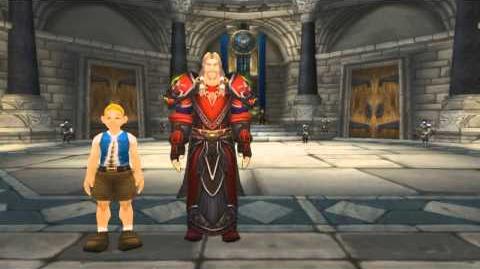 King Llane Wrynn, as he appears in {{Warcraftmovie-inline}} Warcraft: The Beginning