This article is about the 10 and 25-man versions of Loatheb introduced with Wrath of the Lich King. For the original 40-man raid boss, introduced in Patch 1.11,, see Loatheb (original).

Loatheb is the third and final boss of the Plague Quarter in Naxxramas.

Commander Eligor Dawnbringer: "Loatheb. The hideous result of fusing the living plague of the Plaguelands with the bog beasts of Azeroth, Loatheb is said to control the power of healing itself."

Loatheb's melee is relatively weak. Loatheb has approximately 20,200,000 hit points. He will also enter a Berserker Rage at 12 minutes into the fight, killing anyone left alive.

Every 20 seconds Loatheb will cast Necrotic Aura on the raid, reducing all healing done by 100% for 17 seconds. This means you get 3 seconds to heal every 20 seconds.

Every 30 seconds Loatheb will cast this on the raid. Does 400 Nature damage a second for five seconds followed by a 'Bloom' of death for 1500 damage as a reverse Lifebloom. Undispellable. One peculiarity of Deathbloom is that the five small DoT ticks cannot be absorbed by Power Word: Shield, while the larger bloom at the end can be absorbed.

Loatheb begin to cast it after two minutes of combat. Inflicts 5000 Shadow damage after 10 sec. 100 yards, every 30 secs. 5 mins after engaging, this will be every 15 secs. This debuff can not be dispelled, cleansed, or decursed and the damage can not be resisted. Ice Block, Cloak of Shadows and Divine Shield will remove it.

This is a beneficial "debuff" on players gained during the encounter. Critical chance increased by 50%. Spells and abilities cause no threat. 90 secs duration. Loatheb summons spores approximately every 20 secs. Killing the spore (which has very low HP) allows five people within 10 yards to receive this buff.

Every 20 seconds Loatheb will cast Necrotic Aura on the raid, reducing all healing done by 100% for 17 seconds. This means you get 3 seconds to heal every 20 seconds.

Every 30 seconds Loatheb will cast this on the raid. Does 200 Nature damage a second for six seconds followed by a 'Bloom' of death for 1200 damage as a reverse Lifebloom. Undispellable.

Loatheb begins to cast it after two minutes of combat. Inflicts 4000 Shadow damage after 10 sec. 100 yards, every 30 secs. 5 mins after engaging, this will be every 15 secs. This debuff can not be dispelled, cleansed, or decursed and the damage can not be resisted. Ice block, Cloak of shadows and divine shield will remove it.

This is a beneficial "debuff" on players gained during the encounter. Critical chance increased by 50%. Spells and abilities cause no threat. 90 secs duration. Loatheb summons spores approximately every 30 secs. Killing the spore (which has very low HP) allows five people within 10 yards to receive this buff.

This encounter is a DPS race that also hinges on making good use of the available time to heal. You will need one tank.

It is important that everyone in the raid gains the Fungal Creep buff as soon as possible and keeps it. Only 5 people can get it at a time. Therefore each of your 5 groups should have an order to kill the randomly spawning spores, the highest DPS should get it first. As they spawn 5 people will move to the spore and kill it while stacked on top of it. The tank does not need or want the buff.

Two healers should be enough to keep the tank topped off during the available healing time, the rest of the healers will need to heal the raid. Since Necrotic Aura only applies to healing done while it is active, there are a number of tricks available to healers to increase their window for healing, namely precasting a heal so that it casts just as the aura drops, and stacking up Lifebloom so that it will bloom when the aura drops (full stack of 3, ticking through the aura downtime also provides a decent heal). Priests can also use Power Word: Shield, as it does not actually heal, and so is not affected by the aura. However, Power Word Shield will not absorb Inevitable Doom damage and will absorb only part of the damage from Deathbloom, so it is best used on the main tank. Similarly, Sacred Shield on the Main Tank will help to reduce his incoming damage. It is important to note that heal over time spells and healthstones/healing potions will do nothing while the aura is up so only large heals should be used. An exception to this is the Holy Priest's Circle of Healing, which can be used at the end of the healing window, when there is no time remaining to use a spell with a cast time. When not getting the spore buff the raid should remain stacked to facilitate healing. Bandages during the 3 seconds and shadow protection potions can help (these apply whether used within aura uptime or not, since they prevent damage instead of healing it). Should you divine shield or ice block Inevitable Doom the spore "debuff" will fall off and you will need to get it again.

After a while, Inevitable Doom damage will become very difficult to heal so it is important that Loatheb is killed before this.

The priest's discipline tree also has the talent Divine Aegis, which shields the target for 30% after critical heals (3/3). This effect has been reported to work also during the Necrotic aura (still under investigation [1]).

Group construction: One group should be made of 4 DPS + 1 AOE-capable Healer. Any remaining DPS in the raid should be instructed to follow this group. The second group should have all tanks, remaining healers, and any extra DPS.

Positions: Loatheb should be tanked in the center of the room with healers positioned half-way between Loatheb and the entry door. The DPS group will be roaming.

Healers: An assigned healer should announce "Precast!" when there are 3 seconds left on the Necrotic Aura. All healers should then cast a 3-second spell that will succeed the moment the healing window opens. Healers should then focus on their assigned targets using the fastest spells available.

Healers with spells that heal over time (HoT) may be able to "load" spells onto members of the raid before the precast announcement. This will enable the HoT to tick during the healing window. Timed Lifebloom's with an expiration within the healing window may also help boost the healing.

The debuff given by the spores causes 100% loss of threat from all attacks. Because of this, most raids are reluctant to allow the debuff to reach the tank. Use the Divided Method for the first two spores that enter the room. This allows the raid to sustain their DPS with the increased crit chance, but also completely diminishes their threat. During the first two spores, the tank focuses solely on raising his threat on Loatheb as high as possible (tanks doing 4k+ TPS have no problem reaching insurmountable amounts of threat within the first two spores). Positioning of Loatheb and healing assignments are the same as found above.

Once the third spore enters the room, all players in the raid stack on the tank, and no one chases after spores from this point on. The spores are then allowed to crawl their way to where the entire raid is standing, and the spore is popped giving the entire raid the increased critical chance and 100% loss of threat debuff. At this point, there is no downtime from DPS having to run around the room, and all raid members, including the tank, begin to crit non-stop. Because everyone in the raid has 100% loss of threat, there is no need to worry about the tank losing threat (unless someone taunts Loatheb, which should be avoided at all cost). Loatheb can be demolished with this strategy by roughly doom #10, #15 maximum.

An affliction-spec'd warlock with the 51-pointer Haunt will be able to save the raid healers some effort. Watch the debuff that prevents healing and when it ticks from 13 to 12 seconds remaining, start casting your Haunt. This will increase your DPS as Haunt always does, but it also means that the healing effect will return to you with 1500-2000 health during the three seconds when healing can take place.

All Death Knight's have an attack called Death Strike - if timed properly and with 2 sets of [death, frost, unholy] runes you can heal yourself for 3500-5000 total with 2 strikes. Death Knights may also summon a ghoul and then immediately use Death Pact to restore another portion of their health.

Death Knights may also use Anti-Magic Shell, Icebound Fortitude and/or Unbreakable Armor during Dooms to help reduce the amount of incoming damage. The last two only being available for those in frost specc, or Lichborne in partial Frost specc additionally the last two will not reduce the actual Inevitable Doom damage but instead mitigate all other incoming damage.

A Paladin tank may heal him/herself towards the end of the combat, any support-healing in this part is a plus.

In addition, if the raid is having trouble healing, the paladin should consider using Seal of Light, instead of a typical tanking Seal. Since dps with the Fungal Creep debuff will not generate any threat, maintaining a tanking Seal for threat generation should be unnecessary. The additional healing from Seal of Light during the 3 seconds that Necrotic Aura is not up may help slightly to reduce the load on healers. Notably, though, some Paladin tanks will continue to prefer using a tanking Seal, if only to generate additional dps to expedite the end of the fight.

Paladins (preferably retribution paladins should your raid have them, as Judgement of Light scales excellently with AP) should also be certain to maintain Judgement of Light, to further enhance overall healing on the raid during the 3 seconds that Necrotic Aura is not up.

Paladin tanks should maximize their stamina and block value (and block rating, if not already block-capped) during this fight, rather than avoidance. Loatheb's melee strikes are so modest that the majority of his melee damage can be entirely mitigated simply through blocking.

The word "Loatheb" is an anagram for "Healbot", and considering his abilities, this is likely an intentional joke by the developers.

How to solo Loatheb as a lvl 85 Paladin 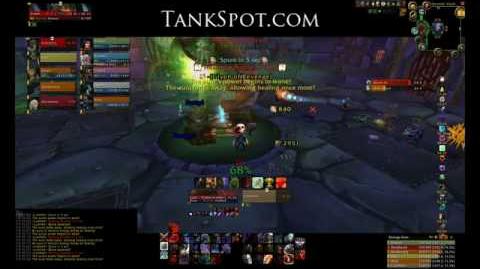 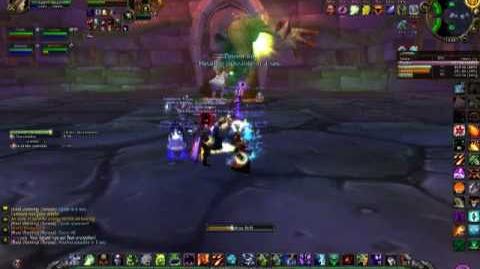 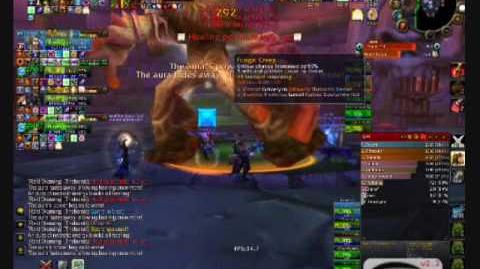