For his background, see Vincent Godfrey.

Lord Godfrey is an undead former Gilnean noble and the last encounter in the Shadowfang Keep.

His death is the objective of the storyline quests:

Just attack. Per today hardly worth even writing a tactic even if it has more or less the same abilities as in heroic. For good effect have your ranged attackers on the upper floor shooting quite weak abilities except for hunters who should attack with switching between serpent sting,arcane shot and focused shot as both serpent sting and arcane shot take a lot of focus and focused shot acts as a good focus replenisher and a good attack

Note: As of 4.0.6, he directs his pistol barrage at a random player, and you can't hide from it by being "above" it on the top level.

First he will cast

Summon Bloodthirsty Ghouls. These ghouls have low health and should be nuked down with any forms of AoE spells your group has. He will re-summon these ghouls periodically, and they should be dealt with in the same manner.

Cursed Bullets is best interrupted. However, it has a VERY fast cast time (one second) and can be hard for a lot of people to successfully interrupt. If it is not interrupted, the next best thing is for the person it hits to be de-cursed. If your group has no de-curser, then your healer will have to heal through the damage. The damage seems to increase over the 15 seconds the debuff is on the target, so be prepared to use your big heals on them. If you have no de-curser and cannot reliably interrupt, it may be best to have a DPS switch to a healing spec and 2-heal for this boss.

Pistol Barrage is a conal attack that he will channel in a random direction around him. You must move away from whichever direction he chooses, as the damage is very heavy and will drain the healer's mana fast, assuming you survive. Height doesn't affect whether Pistol Barrage will hit you. It has infinite vertical range. Keep that in mind if the tank is attempting to platform-jump to avoid...

Mortal Wound, an ability which he uses periodically on his current target. This is best avoided by either tanking him near the stairs and running up them, then jumping off (or, even better, jumping from the entrance platform to his spawn platform), or by getting some distance during Pistol Barrage. You have a wonderful area to use to shake the debuff - use it. Alternatively, have a DPS with a taunt ability position themselves in a good taunting area to allow the tank's debuff to fade.

Any group with most items 333 should be able to down this boss. If you have Heroism/Bloodlust/Time warp, then it is best to use this after the second wave of ghouls. Avoiding damage, as with any fight, is the key to winning. The boss doesn't hit that hard; however, his debuff and his abilities do allow him to do a lot of spike damage to the group. 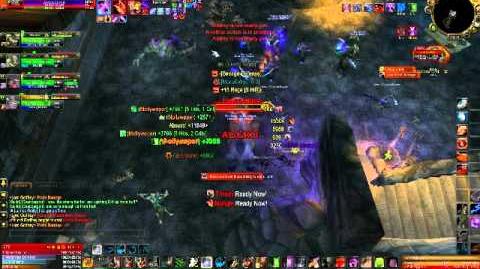