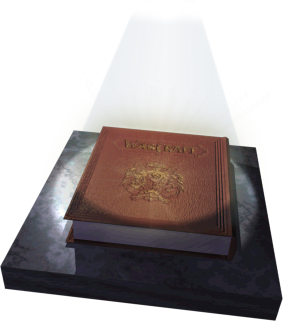 Lore in the Warcraft series of games is a term used for "background story". The use of the term stems from Blizzard's snippets of "lore" for many of the multiplayer maps in their Warcraft RTS games, although how much of it has a relationship to the main Warcraft universe storyline is unclear.

Authors of World of Warcraft lore

Besides the authors of the novels, manga/manhwa, and short stories, the primary authors of

Why don't we use the word "canon"?

Canon is an oft-used term by Warcraft fans regarding official lore, specifically the fictional accounts in the Warcraft universe. This type of lore can be referred to as "canonical" lore.

WoWWiki strives to have a neutral point of view on official lore due to it being rarely discussed by Blizzard, although examples exist:

A lot of times... depending on when one thing gets started during another, we happen to be in the middle of the game, or doing the manga thing for instance or this comic series specifically, we try to engineer as much inner play as possible. Like characters in the manga series showing up in Netherstorm and we are doing stuff like that, so we want to make everything feels as continuity friendly and as integrated as possible. Cuz that would make it cool as if all its moving, right. - Chris Metzen[2]

Metzen also stated that a character of the

"I’m sure this will be controversial, but I don’t necessarily consider her canonical, and based on that we haven't really had any plans of leveraging her in the future. Uh, I think she appeared in one of the RPG books, but you know she's just not a character I have thought about, so at this point I don't really know if we are going to do much with her." - Chris Metzen[3]

Because the use of the term is rare and mostly in interviews, and as calling something "canon" often precludes the possibility of discussion about validity and "truth" (i.e., whether something in-universe is supposed to be gospel truth in that universe versus the more realistic stance of belief from a group's point of view) we avoid using this term to describe lore in the WoWWiki articles in order to keep a neutral point of view.

While we cannot stop the use of the term "canon" in talk page discussions, the term is not allowed in articles. The only exception is when verifiable public quotes from actual first-party Blizzard employees (such as Chris Metzen) are allowed in articles, and then only if there are direct links to the sources of the quotes.

Scrolls of Lore - A lore site and forum.

gameinformer A Look Inside How Blizzard Maintains World Of Warcraft's Lore by David Milner on Aug 14, 2018 at 09:30 AM

WoW Insider Know Your Lore: Getting into the lore of

WoW Insider Know Your Lore: The role of characters in WoW lore by Matthew Rossi May 30th 2012 1:00PM