This article is about the character M'uru. For information on how to defeat M'uru in World of Warcraft, please see M'uru (tactics).

Deceased; Used to re-ignite the Sunwell.

M'uru was the sole naaru guardian of Tempest Keep and currently resides on the Sunwell Plateau. When the keep was invaded by Kael'thas and his blood elf followers, M'uru was captured and taken to Farstriders' Square in Silvermoon City, where his energy was being drained for use by the Blood Knights.

M'uru was a hostile level 73 to Horde players prior to patch 2.4, but did not attack and could not be attacked. He was not hostile to Alliance players, however. The blood elves draining him could not be killed (they would remain at one percent health).

In Patch 2.4.0, Kael'thas and his felblood minions captured M'uru from Silvermoon City and took him to Sunwell Plateau. The magisters who were draining him now stand dazed.

Without M'uru, Lady Liadrin was forced to seek out another source of power for the Blood Knights. She speaks to A'dal in Shattrath City, asking for forgiveness for M'uru's imprisonment, and pledging her allegiance to the Shattered Sun Offensive. In that same instant, it is revealed that M'uru's imprisonment was foretold by Velen. M'uru willingly accepted his role in the events that unfolded, knowing that it would lead to the elves' redemption.

Blood elf paladins completing Claiming the Light must now gather remnants of "holy energy" that linger around the magisters, rather than the previous requirement of draining M'uru directly.

M'uru appears as a boss in Sunwell Plateau. He is now a darkened naaru, transforming into Entropius part-way through the encounter.

After Kil'jaeden is defeated, Velen uses M'uru's "spark" to reignite the Sunwell. 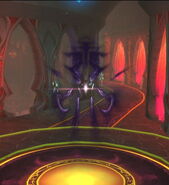