For the manga, see World of Warcraft: Mage.

The mage is a DPS caster that specializes in burst damage and area of effect spells. Their primary role in a group is damage dealing and crowd control through the use of [Polymorph]. At end-game levels, mage damage is supplemented with spells like Counterspell and Spellsteal. Mage utility spells also include conjuring food and drink and the ability to teleport to major cities and open portals for party members. In PvP, magi deal ranged damage while using snare effects and Polymorph to control enemy players.

Magi, the most common of arcanists, are found all over Azeroth. They focus on magic that creates and changes things, most often with the purpose of damaging their enemies and boosting the power of their allies.[1] Such beings can obtain a familiar, which is a normal animal that gains new powers and becomes a magical beast when summoned to service by a mage,[1] while others choose to become a focused mage.[2] Magi also understand the workings of arcane energy so well they can counter most magic with great effectiveness. Those who have dedication to and natural predilection for one of the schools of specialization becomes more entrenched. At this point they choose either evocation or transmutation as a preferred school. The magi of the Kirin Tor first mastered the art of casting spells using the elements of ice and fire. Magi are also known for being able to summon elementals, usually water elementals, but can also summon air, earth, and fire elementals.[3] The greatest mortal mage ever to have lived is the naga, Queen Azshara. In fact, she may no longer be mortal.[4]

Early kaldorei civilization was defined by direct manipulation of magic drawn from the Well of Eternity to create and sustain their society. The constant use of the Well attracted the attention of Sargeras and the Burning Legion; their coming resulted in a massive war known as the War of the Ancients. The war had grave consequences, for even though the combined might of Azeroth's mortal races were victorious, the continent of Kalimdor was shattered and a swirling, raging miasma of sea storms flowed into the vacant area where the Well of Eternity used to reside. This Great Sundering caused the Well's waters to dissipate into the atmosphere and spread magic all over the world.

This event convinced the majority of night elves to reject arcane magic and embrace Malfurion Stormrage's call for druidism. Many of the Highborne refused this lifestyle and were exiled to Lordaeron, where they eventually founded their kingdom of Quel'Thalas and became the high elves. When their kingdom came under siege by the trolls of Zul'Aman, the high elves agreed to teach one hundred humans the art of magic in exchange for military aid from Arathor. From these two races, the arcane arts have spread to various races all over Azeroth.

Although masters of their art, the Conjurers of Azeroth who fell during the First War were unprepared for the rigors of warfare. A new breed of magi, once students of the Conjurers, were determined to avoid a similar fate. This new order was forced to discover untapped magical forces to command in their war against the ruthless orcs, dedicating themselves to the command of more aggressive and destructive magic. Whether in their sanctum at the Violet Citadel in Dalaran or on the many battlefields of Lordaeron, the Kirin Tor are resolute in their efforts to defend the people.[5]

The most powerful magi of the Eastern Kingdoms were perhaps the Archmagi of Dalaran. The city was transported to Northrend when the magi believed they were in danger from the Lich King and further moved to the Broken Isles to assist in thwarting the Burning Legion's most recent invasion. The Kirin Tor are quick to recognize fellow magi as allies, but outsiders must prove themselves.

The mage class can be played by the following races:

Magi can use wands, daggers, one-handed swords, or staves. Wands go in the main hand, continue to shoot once manually started, and do not require any form of ammunition. A mage can only wear cloth armor.

These are learned at the portal trainers in each main city, with the exception of the Ancient versions.

The endgame mage also acts as a utility class, providing drink, food, buffs and portals. It is expected that magi provide their party or raid with food and drink for free.

PvP-wise, magi are considered "glass cannons" - a design philosophy which gives them generous burst damage at the cost of generally low health and armor values. They are one of the classes with the potential for dealing out the greatest amount of damage in the shortest amount of time. In group PvP, they will stay back and focus on crowd control with Polymorph and pick off targets from range. Depending on the battleground and the situation, magi typically AoE to prevent node captures or nuke flag carriers as fast as possible. In solo PvP, a skilled frost mage is a formidable opponent.

Fire mostly consists of stuns and max damage output at the cost of time and mana. Arcane consists of medium damage output at a low cost of mana and time. Arcane is most useful in battlegrounds if opponents are frozen first. When an enemy approaches or is attacking, the mage uses Freeze, then Blinks away and attacks. On average, the freeze ability gives about five uninterrupted seconds to attack. 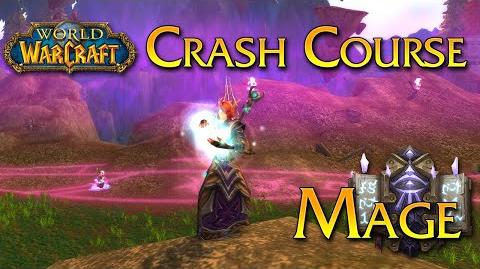